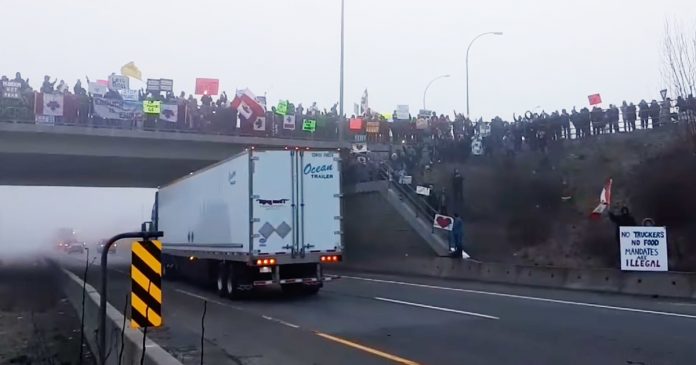 GoFundMe has announced that it will not be releasing over $9 million dollars in donations to the trucker Freedom Convoy 2022 organizers.

The online funding platform posted the announcement on Friday on the Freedom Convoy’s fundraising webpage.

In its reasons for cancelling the fundraiser and withholding the money, GoFundMe stated that it “now has evidence that the previously peaceful demonstration has become an occupation, with police reports of violence and other unlawful activity.”

“To ensure GoFundMe remains a trusted platform, we work with local authorities to ensure we have a detailed, factual understanding of events taking place on the ground. Following a review of relevant facts and multiple discussions with local law enforcement and city officials, this fundraiser is now in violation of our Terms of Service (Term 8, which prohibits the promotion of violence and harassment) and has been removed from the platform.”

The platform goes on to say that while it had “released” an initial $1 million, “no further funds will be directly distributed to the Freedom Convoy organizers – we will work with organizers to send all remaining funds to credible and established charities verified by GoFundMe.”

“All donors may submit a request for a full refund until February 19th, 2022 using this dedicated refund form.”

The platform had originally suspended the convoy’s fundraiser pending a review.

Freedom Convoy organizers had spoken to media about the suspension Thursday.

Co-organizer Tamara Lich said accountants and lawyers working for the convoy had been communicating with GoFundMe and that she had hoped they would be lifting the account’s suspension soon.

Justice Centre for Constitutional Freedoms lawyer Keith Wilson appeared alongside Lich, saying that most of the money was being held by GoFundMe because they were “bombarded with an orchestrated social media campaign to try and shut it down.” He said that all of the legal and accounting requirements have been met.

“Once we reach the point where GoFundMe has released the funds, the corporate lawyer experts on the team as well as the accountants are currently refining the process for truckers and others who have been involved with the convoy to be reimbursed,” said Wilson.

“Over the past year, the federal government in Canada under Prime Minister Trudeau has taken away Canadians’ Charter rights, constitutional rights, to travel freely, has taken away truckers’ rights to travel, their mobility rights, their ability to make a living under the Constitution for those who’ve chosen to be unvaccinated,” Wilson said.

“This afternoon, the chief of city police for Ottawa made announcements that are disturbing and should trouble Canadians and those around the world who support this trucker protest for freedom. The police chief essentially announced an assault on the protesters. He announced that very specific measures that we normally only see instituted by oppressive regimes around the world would be initiated.”

“He effectively announced that he is going to be taking away Canadians’ Charter rights to peaceful assembly and freedom of expression.”

“We are being censored,” said Wilson. “Please get this out to the world.”

Earlier in the day, Ottawa Police chief Peter Sloly gave a press conference and issued a statement, referring to the protest repeatedly as “unlawful” and saying, “(o)ur goal is to end the demonstration.”

funding and enabling unlawful and harmful activity by the protesters themselves,” Sloly said. “Investigative evidence gathering teams are collecting financial, digital, vehicle registration, driver identification, insurance status and other related evidence that will be used in prosecutions.”

“Every unlawful act including traffic and insurance violations will be fully pursued, regardless of the origin at any time in the future. The primary focus of each of these measures will be on the unlawful behaviour connected to the ongoing demonstrations, this includes parallel and counter demonstrations. We strongly urge all demonstrators and those engaging with the demonstrators to act lawfully, peacefully and respectfully.”

“The hatred, the violence, the illegal acts that Ottawa residences and businesses have endured over the last week is unacceptable in any circumstance,” Sloly said. “The Ottawa Police Service and the City of Ottawa are bringing significantly greater resources to restore order, hold offenders to account and protect our neighbourhoods.”

“The current demonstration in the parliamentary precinct red zone remains unresolved despite significant successes in reducing the number of trucks, and demonstrators while preventing riots, injuries or deaths. We take no solace in these operational successes to date.”