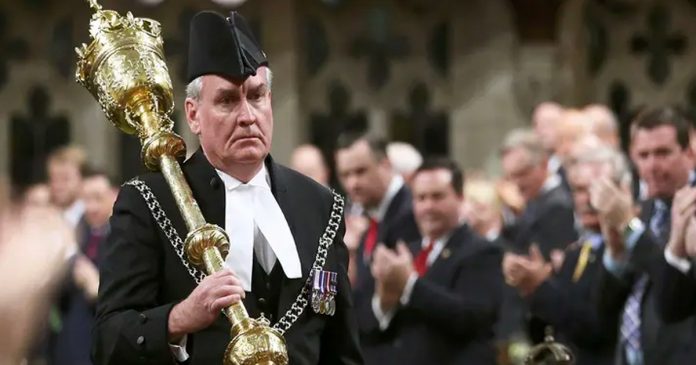 Former Sergeant-at-Arms Kevin Vickers has said there should be respect when it comes to dialogue with the truckers’ convoy in Ottawa.

Vickers was lauded as a hero and presented with the Star of Courage for ending the Oct. 22, 2014 Parliament Hill terror attack after shooting gunman Michael Zehaf-Bibeau

“Respect actually means listening to something you’d rather not hear and listening must include the possibility of recognizing there may be a meaningful grievance on the other side,” tweeted Vickers on Thursday.

Left-wing politicians and legacy media have demonized the truckers currently assembled in Ottawa, calling them names and painting them as extremists and terrorists.

Prime Minister Justin Trudeau has alternatively labeled the peaceful protestors as a “fringe minority” with “unacceptable views,” “tinfoil hats” and an “insult to truth.”

Additionally, legacy media outlets have compared the protestors to domestic terrorists and insurrectionists, even suggesting the convoy had been organized by Russia.

Despite the smears, truckers and their supporters will continue to demonstrate against COVID-19 measures and the erosion of freedoms under Trudeau this weekend.

On Jan. 29, tens of thousands of Canadians converged on Parliament Hill in support of the truckers and their goal to regain freedoms lost under Prime Minister Justin Trudeau and his ongoing COVID restrictions.

Originally, the protest movement was prompted by the Liberal government’s decision to mandate vaccination for cross-border truck drivers. Estimates suggested that nearly 10% of truckers remained unvaccinated, and experts warned that the mandate would have devastating effects on Canada’s already frail supply chain.

Since the convoy began, several other cities have held similar protests with more being planned for this weekend.

Contrary to the example of the governing federal Liberals, even Quebec premier Francois Legault suggested he would be willing to meet with convoy organizers when the Quebec contingent arrives in his province’s capital on Saturday.

Demonstrations are expected to take place in Victoria, Quebec City, Toronto and several other major cities across the country.