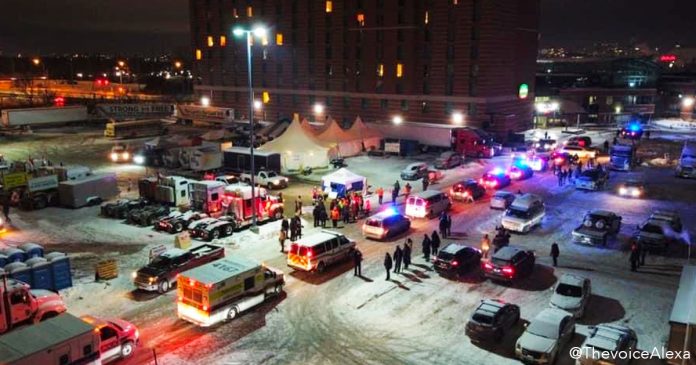 Ottawa Police announced Sunday that they had begun to arrest people who provide the Freedom Convoy protesters with support items such as fuel and other unspecified materials.

The move comes as Ottawa mayor Jim Watson declared a state of emergency earlier in the day.

“Anyone attempting to bring material supports (gas, etc.) to the demonstrators could be subject to arrest,” said Ottawa Police in a tweet on Sunday. “Enforcement is underway.”

Police issued a press release later Sunday evening confirming they had arrested seven people and issued 100 tickets in “demonstration-related enforcement.” The release also stated that Confederation Park, which the protesters had been using as a distribution hub, “has been fully cleared and fenced.”

Protestors had been using vehicles, wagons and sleds to transport gas cans and propane canisters to trucks parked near Parliament Hill.

Ottawa deputy police chief Steve Bell told CTV News that the arrests are part of their efforts to shut down the protest.

“Look at how we limit things moving in and out of the protest area,” said Bell. “We’ve really focused and targeted on removing the access of gasoline to the area and we’ve had several seizures and several arrests related to that.”

Police said that they worked throughout Saturday to reduce the effects of protestors occupying the downtown core.

“Overnight, demonstrators exhibited extremely disruptive and unlawful behaviour, which presented risks to public safety and unacceptable distress for Ottawa residents,” said the police force in a press release on Sunday. “We continue to advise demonstrators not to enter Ottawa and to go home.”

Police said that they had responded to more than 650 calls since the Freedom Convoy began. More than 450 tickets had been issued since Saturday for charges such as excessive noise, use of fireworks and failure to drive in marked lanes.

It is not yet clear if the new arrests are part of Ottawa’s recently declared state of emergency.

“Declaring a state of emergency reflects the serious danger and threat to the safety and security of residents posed by the ongoing demonstrations and highlights the need for support from other jurisdictions and levels of government,” said the City of Ottawa in a press release.

This state of emergency, the city said, provides “greater flexibility within the municipal administration to enable the City of Ottawa to manage business continuity for essential services for its residents and enables a more flexible procurement process.”

The Freedom Convoy entered its 15th day on Sunday, and was supported by continuing convoy protests against COVID restrictions in cities across Canada including Quebec City and Toronto.