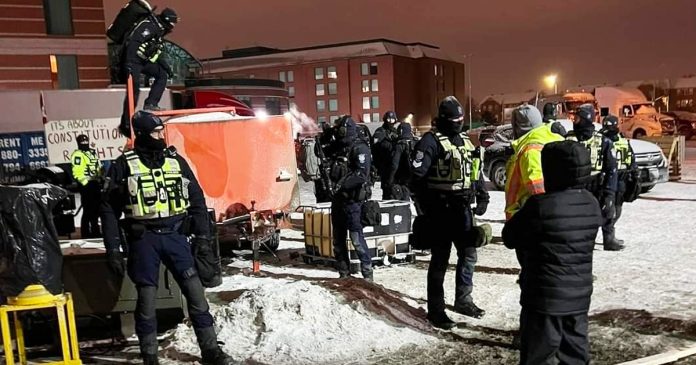 On day 15 of the Truckers For Freedom Convoy, the mayor of Ottawa declared a state of emergency, police began arresting people who provided truckers with gasoline and other supplies and the legacy media cheered it all on.

Ottawa mayor Jim Watson declared a state of emergency on Sunday, with city hall posting the following explainer –  “Declaring a state of emergency reflects the serious danger and threat to the safety and security of residents posed by the ongoing demonstrations and highlights the need for support from other jurisdictions and levels of government.”

Ottawa Police also announced on Sunday that they would be arresting anyone who assisted the truckers by bringing them gasoline, food and other resources.

“We’ve really focused and targeted on removing the access of gasoline to the area and we’ve had several seizures and several arrests related to that,” the police statement read.

Video of police seizing gasoline for the truckers was posted to Twitter.

In a parking lot just outside of Ottawa where truckers had established a distribution camp for materials and goods, Ottawa Police can be seen seizing and hauling away fuel that the truckers had purchased for the continuation of their protest.

Truckers hauling fuel to truckers earlier in the night stopped to speak to a journalist who was filming what was happening.

One man from Alberta who works in construction can be heard saying, “right now, we’re all one people, trying to help each other. It doesn’t matter what race, creed, gender, it doesn’t matter, we’re all in this together.”

Large crowds had gathered in Ottawa again this morning. Aylmer Pastor Henry Hildebrandt held another Sunday service today in front of the Parliament Buildings, as he had done one week ago.

Earlier in the day, Pastor Hildebrandt had put out an invitation to Ottawa police chief Peter Sloly and Prime Minister Justin Trudeau to take a knee and pray with them.

The blockade in Coutts, Alberta continued to grow on day 8 of their own ongoing blockade.

This aerial footage shows the size and scale of the blockade at the Canada-US border in Coutts.

Footage from inside the home base of the Coutts protesters shows them singing and playing music.

Jason Kenney is expected to make an announcement tomorrow on the ongoing situation at the Coutts border, and to address his promise of removing Alberta’s COVID restrictions and vaccine passport.

Trudeau is still refusing to speak publicly after the press conference he gave on Monday that inflamed tensions across the country.

True North will continue to bring you ongoing coverage of the scenes unfolding in Ottawa and across the country.

By the time this article was published, the new Givesendgo in support of the truckers had reached USD $4,034,336.