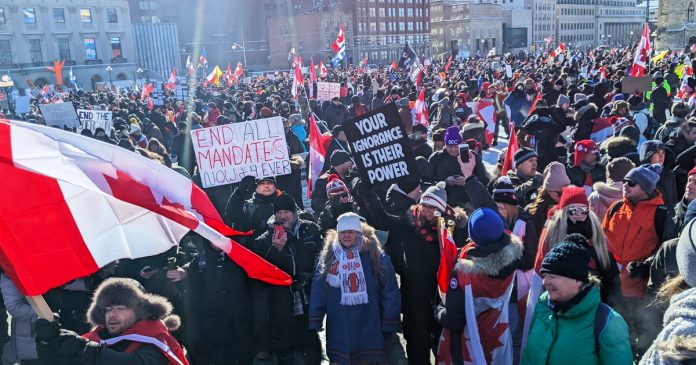 With video now showing Ottawa Police confiscating fuel and arresting truckers for carrying empty gas cans, constitutional lawyers on the ground in Ottawa are warning police that it is illegal for them to be intimidating or arresting people for these actions.

“People who bring food, water, gasoline or other supplies to peacefully protesting truckers are not breaking any law,” stated Justice Centre for Constitutional Freedoms (JCCF) lawyer Nicholas Wansbutter in a press release. “There is no basis for this police threat, that was issued by Twitter (Sunday) morning.”

On Sunday, Ottawa Police had warned that “anyone attempting to bring material supports (gas, etc.) to the demonstrators could be subject to arrest. Enforcement is underway.”

Video arose the same evening of police confiscating fuel supplies, including a 3200 L diesel container from a baseball stadium being used as a distribution hub. Police also issued a press release confirming they had arrested seven people and issued 100 tickets in “demonstration-related enforcement.”

Not to be outflanked, protesters resorted to new methods.

On Monday, video and images appeared of Ottawa protesters carrying what looked to be empty gas cans and others containing what appeared to be juice. Some walked right past police, with one protester offering an officer a drink from his, saying it was Kool Aid.

In another video, however, a protester appears to be arrested for carrying an empty gas can, explaining as he is led off by an officer that the charge was “mischief.”

True North reached out to the JCCF, asking how it was that police could target individuals for carrying certain legal items, including “material supports” to protesters.

“In my view, the truckers are not doing anything illegal by protesting peacefully against the 23 months of politicians restricting our Charter freedoms,” said Wansbutter in a press release on Tuesday. “Citizens have every right to bring food, water, fuel, and other necessities of life in the winter to other Canadians, including truckers.”

“For police seizures of fuel to be legal, the truckers themselves would have to be actively and knowingly committing an offence. Only then could it be a crime to bring supplies to the truckers.”

The JCCF also provided video of an Ottawa police officer justifying his seizure of fuel on the basis that “the fuel is contributing to mischief.”

“This fuel is contributing to what’s been happening downtown, so this is evidence,” the officer is heard to say.

Arguing that the seizure is illegal, the JCCF says that “section 430 (mischief) also makes it illegal to interfere with the lawful use and enjoyment of property, and illegal to obstruct people when they legally use and enjoy property.”

“The Ottawa police seem to be rebranding the exercise of the Charter freedoms of expression, association, and peaceful assembly as criminal mischief under section 430 of the Criminal Code,” Wansbutter said. “Taking fuel from Canadian citizens in the downtown Ottawa area is an illegal seizure in a context where no crimes are being committed, and no charges were laid against truckers or anyone else.”

“Ottawa police have the right to ticket people, including truckers, over seatbelt violations, illegal parking, and other traffic infractions,” added JCCF litigation director Jay Cameron. “However, it is misleading and deceptive to label a peaceful protest in the nation’s capital as a criminal offence.”

True North reached out to Ottawa Police Service (OPS) on Tuesday to request comment on the JCCF’s position and inquire about the legal basis for their recent seizures and arrests. The OPS media relations department replied only with a press release stating that “police continue to prevent people from supplying fuel and other material supports to demonstrators” and that 23 arrests on criminal charges had been made.

“This includes charges for the following: Mischief (Transportation of Gas)”

Cameron also pointed out that confiscating fuel from people trying to keep warm was not simply illegal but dangerous.

“It is winter in Canada,” he said. “Protesting publicly in freezing temperatures requires the truckers to have fuel to stay warm. Confiscation of fuel jeopardizes the personal safety of the peaceful protesters.”

The JCCF also pointed out that despite his varying references to the protest as a “demonstration,” “occupation,” and “siege,” OPS chief Peter Sloly admits that protesters have not harmed Ottawa citizens.