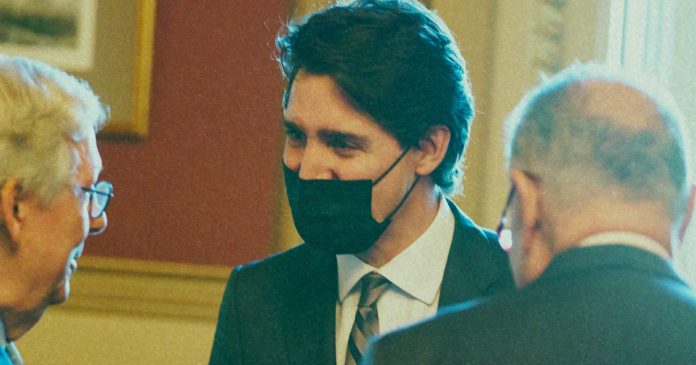 Canadian civil rights and legal organizations across the political spectrum have come out squarely against Prime Minister Justin Trudeau’s decision to implement the Emergencies Act to deal with trucker protests.

The Canadian Civil Liberties Association (CCLA), the Canadian Centre for Constitutional Freedoms (CCCF) and the Canadian Constitution Foundation (CCF) have all released statements opposing Trudeau’s announcement on Monday, saying the current situation does not meet the high threshold required for the extraordinary legislation to be enacted.

“Governments regularly deal with difficult situations, and do so using powers granted to them by democratically elected representatives,” said the CCLA in a press release Tuesday. “Emergency legislation should not be normalized. It threatens our democracy and our civil liberties.”

Alongside grassroots protests calling for an end to ongoing COVID restrictions and mandates, blockades at border-crossings have sprung up in British Columbia, Alberta, Manitoba and Ontario.

“We are making these changes because we know that these platforms are being used to support illegal blockades and illegal activity which is damaging the Canadian economy,” Liberal finance minister Chrystia Freeland said on Monday.

The CCLA pointed out that that the Emergencies Act “can only be invoked, according to its own terms, when a situation “seriously endangers the lives, health or safety of Canadians and is of such proportions or nature as to exceed the capacity or authority of a province to deal with it” or “seriously threatens the ability of the Government of Canada to preserve the sovereignty, security and territorial integrity of Canada” and when the situation “cannot be effectively dealt with under any other law of Canada.”

“The Emergencies Act is there to address these kinds of extreme threats to Canada, not to protect the economy.”

The JCCF, which has been on the ground in Ottawa working with Freedom Convoy organizers from the beginning, characterized Trudeau’s use of the Emergencies Act as a farcical overreach of federal powers.

“Peaceful protesters who feed the homeless, shovel snow, pick up garbage, dance in the streets, play street hockey, wave Canadian flags, sing the national anthem and set up bouncy castles for children do not ‘seriously endanger the lives, health or safety of Canadians,’ nor are these peaceful activities ‘of such proportions or nature as to exceed the capacity or authority of a province to deal with it.’”

Among the premiers – whose support Trudeau does not need – only Ontario’s Doug Ford has publicly endorsed the prime minister’s adoption of the measure, but did so after the Ambassador Bridge blockade had already been cleared.

“Provincial police forces already possess all of the powers necessary to enforce the law and keep the peace, as demonstrated in the Ontario Provincial Police’s successful clearing of the Ambassador Bridge,” said the CCF on Monday.

“It’s more a logistical challenge than a threat to the integrity of the country,” the Macdonald-Laurier Institute’s Aaron Wudrick told the Wall Street Journal. Wudrick added, however, that several powers in the Emergencies Act – including compelling tow-truck drivers to help police move trucks – are a problem.

“It seems to me that compelling individuals against their will to help the government seems like a suspension of civil liberties.”

The Emergencies Act has never before been used in Canada, not even during the 1990 Oka Crisis that saw nearly 5000 soldiers deployed, 2 deaths and more than 100 injuries. The Act was not used on 9/11 nor during the 2014 Parliament Hill terror attack.

Trudeau had originally floated using the Emergencies Act in April 2020 at the start of the pandemic but was resoundingly opposed by the premiers. B.C. premier John Horgan is reported to have become so angry over the idea that he swore out loud.

As of Tuesday afternoon, Trudeau had yet to present to Parliament the required plan and justification for invoking the Act.