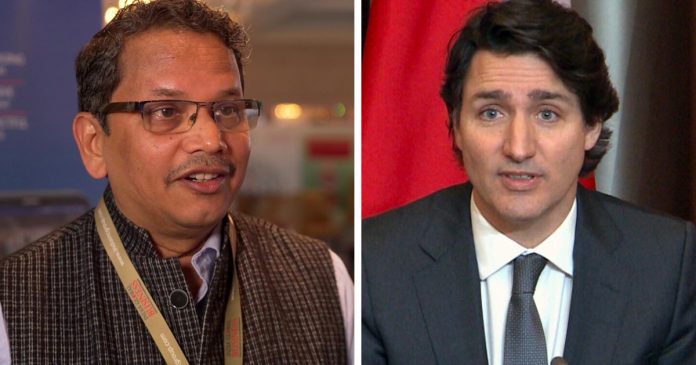 The head of Foreign Affairs for the Bharatiya Janata Party – one of India’s two largest political bodies – has called out Prime Minister Justin Trudeau for invoking the Emergencies Act to quash ongoing trucker convoy protests.

Dr. Vijay Chauthaiwale, who is a molecular biologist, blasted Trudeau’s hypocrisy on Tuesday, pointing to the fact that the prime minister supported ongoing protests in India in 2020.

“And this was (Justin Trudeau) when there were street protests in India ‘Canada will always be there to defend the rights of peaceful protesters,’ Chatuhaiwale tweeted in response to an article about the Liberals pledging to freeze the bank accounts of protestors.

When farmer protests rolled through India that year, Trudeau was criticized by the Indian government for his stance.

“Canada will always stand for the rights of peaceful protests anywhere in the world and we are pleased to see moves towards de-escalation and dialogue,” Trudeau had said of the India protests.

“Such actions, if continued, would have a seriously damaging impact on ties between India and Canada,” India’s Ministry of External Affairs wrote at the time of Trudeau’s stance.

Trudeau also negotiated with anti-pipeline protesters that same year who blockaded critical infrastructure and set train tracks on fire. He also appeared in solidarity with a Black Lives Matter protest in 2021 as riots and violence erupted throughout the United States.

Trudeau has been facing flack from the opposition in the House of Commons after invoking the Act on Monday and pledging to crack down on the peaceful protests seeking to end COVID-19 mandates across Canada.

“He name-calls people that he disagrees with, he wedges, he divides, he stigmatizes, yet in spite of all of his failure, the Coutts border has cleared, Windsor has opened up,” said interim Conservative leader Candice Bergen.  “Provinces and police are doing their jobs, and blockades are starting to come down, but the prime minister thinks that now is the time to use this extreme measure and invoke the Emergencies Act. Isn’t it true that the prime minister’s actions can serve to actually make things worse and not make things better?.”

“This is about keeping Canadians safe, protecting their communities and neighbourhoods and ensuring jobs in our economy,” said Trudeau.

Not long before, the Ambassador Bridge standstill was also cleared.

Several civil and legal rights organizations have come out against Trudeau’s invocation of the act, saying it is unnecessary in the face of existing powers and that the current situation in Canada does not meet the high threshold necessary for its enactment.