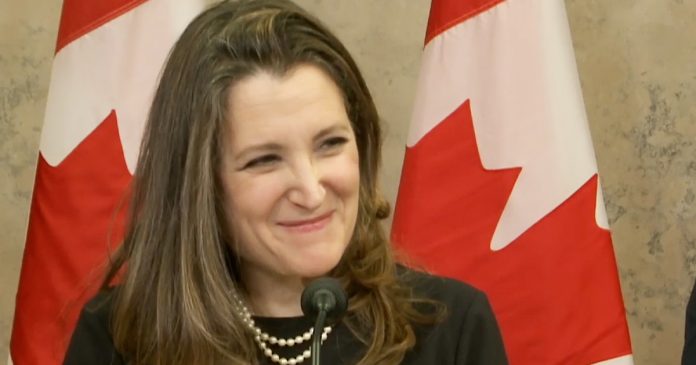 Liberal deputy prime minister and finance minister Chrystia Freeland has confirmed that the RCMP has received the private information of “individuals and entities” involved with funding the Freedom Convoy and that “accounts are being frozen.”

The announcement comes only days after Prime Minister Justin Trudeau invoked the Emergencies Act to quash anti-COVID-19 mandate demonstrations in Ottawa and elsewhere.

Freeland was asked at a press conference on Thursday whether the bank accounts of individuals who had donated to the Freedom Convoy’s GoFundme and GiveSendGo fundraisers had been targetted.

“The names of both individuals and entities as well as crypto wallets have been shared by the RCMP with financial institutions, and accounts have been frozen, and more accounts will be frozen,” answered Freeland.

“Crowdfunding platforms and payment service providers have started the registration process with FINTRAC (Financial Transactions and Reports Analysis Centre of Canada). In terms of the specifics on whose accounts are being frozen, you now have the regulations – the financial service providers have those regulations as well – and they, working with law enforcement, will be making the operational decisions.”

According to the Order in Council associated with the Act, the federal government has power to “regulate or prohibit any public assembly” that “may be expected to lead to a breach of the peace.”

The Act also grants the Liberals powers to “require any crowdfunding platform and payment processor to report certain transactions to FINTRAC and to require any financial service provider to determine whether they have in their possession or control property that belongs to a person who participates in the blockade.”

On Monday, Freeland had laid out how cryptocurrencies would be regulated under terrorist financing rules by the federal government during the duration of the so-called emergency.

“We are broadening the scope of Canada’s anti-money laundering and terrorist financing rules so that they cover crowdfunding platforms and the payment service providers they use. These changes cover all forms of transactions including digital assets such as cryptocurrencies,” said Freeland.

Civil liberties and legal groups along with prominent voices from around the world have condemned Trudeau for invoking the Act.

“Emergency legislation should not be normalized. It threatens our democracy and our civil liberties,” said the Canadian Civil Liberties Association.