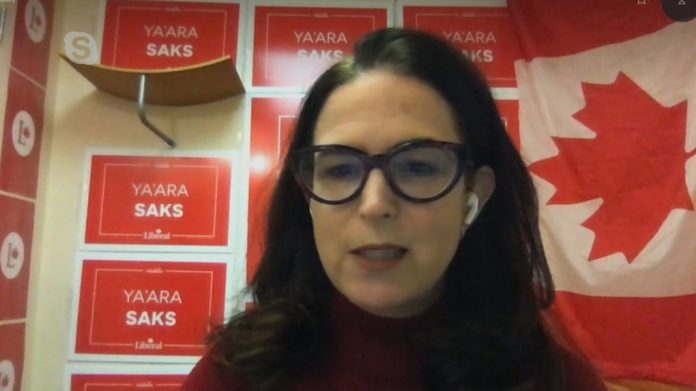 Saks made the claim on Monday while testifying in defence of Prime Minister Justin Trudeau’s implementation of the Emergencies Act to crack down on convoy protesters.

“How many guns need to be seized?” said Saks in the House of Commons on Monday. “How much vitriol do we have to see of honk honk – which is an acronym for heil Hitler – do we need to see by these protesters on social media?”

Saks attempted to justify her remarks by sharing a Twitter thread about the topic.

“For those of you who think that honk honk is some innocuous joke, I’ll leave this here,” she said.

She included a screenshot of a tweet from Antifa member Gwen Snyder that said since “heil Hitler” and “honk honk” both have two Hs, it is “often used ‘ironically’ by alt-right trolls.”

“Actual tweet from Liberal Member of Parliament seeking to back up her claim that saying ‘honk honk’ means you are pledging allegiance to Adolf Hitler,” said Kay. “These are the people running our country.”

Since the Freedom Convoy arrived in Ottawa on Jan. 29, Trudeau has insisted on characterizing the protesters as racists and other kinds of extremists, repeatedly referring to sightings of a swastika flag and a Confederate flag to delegitimize the entire movement.

Trudeau’s decision to invoke the Emergencies Act passed in the House of Commons due to support from the NDP on Monday. The Conservatives and Bloc Quebecois opposed it.

The government was, however, required to seek approval from the House of Commons within seven days to extend its use for at least another four weeks.

Had the vote failed, the emergency declaration would have been revoked. A federal election might have been called because it was a confidence vote.

The passing of the motion in the House of Commons would keep the emergency measures in place until mid-March, when Parliament would review the measures again.

The Senate – which is currently debating the motion – must vote on the government’s request, but its approval will be more of a formality.