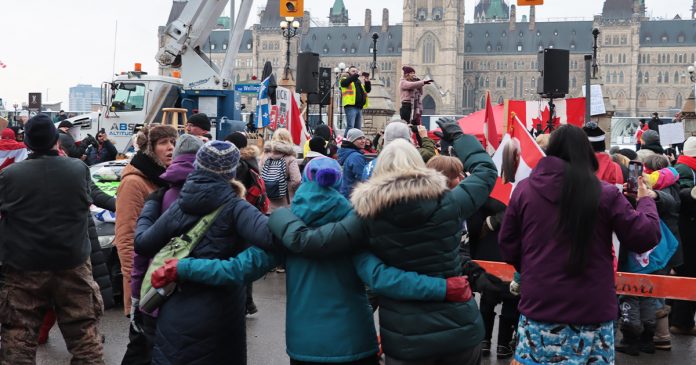 Banks across Canada have frozen Canadians’ accounts to the tune of nearly $8 million after the Trudeau government ordered a crackdown on the freedom convoy’s financial support.

According to Blacklock’s Reporter, the Department of Finance said during a Commons finance committee meeting that even a $20 donation could lead to consequences.

“It would be unlikely that someone who gave $20 three weeks ago or even $20 post-February 15 would have been captured by a freeze. It’s not impossible,” said assistant deputy finance minister Isabelle Jacques.

“To my knowledge it is over 206 accounts and the total value – the latest number I have – was approximately $7.8 million. We know those accounts are personal and commercial accounts. It’s a mixture of the two.”

After Prime Minister Justin Trudeau invoked the Emergencies Act on Feb. 14, the federal government dictated that banks could freeze or seize the assets of those participating in the Ottawa protests as well as those who provided financial support.

According to Jacques, the RCMP provided the names of individuals associated with the movement from a watch list of donors and participants. The owners of the funds were not notified that they had been targeted until their accounts were frozen.

Under the Emergencies Act, banks do not require a warrant to seize the funds, nor do they face any legal consequences for doing so.

“Prior to an account being frozen, are you aware of an opportunity for an individual to either be notified or to make any representations to the financial institution or law enforcement?” asked Conservative MP Adam Chambers.

“No, not to my knowledge, not under this order,” Jacques replied.

The Orders in Council detailing the government’s emergency powers also requires “any crowdfunding platform and payment processor to report certain transactions to the Financial Transactions and Reports Analysis Centre of Canada (FINTRAC) and to require any financial service provider to determine whether they have in their possession or control property that belongs to a person who participates in the blockade.”

Despite the Liberals’ repeated claims that foreign extremists were funding the freedom convoy, the deputy director of intelligence at the Financial Transactions and Reports Analysis Centre of Canada (FINTRAC) shut down such claims.

“The money… what’s happening in Ottawa has not been identified to my knowledge as ideologically motivated violent extremism,” said deputy director Barry MacKillop.