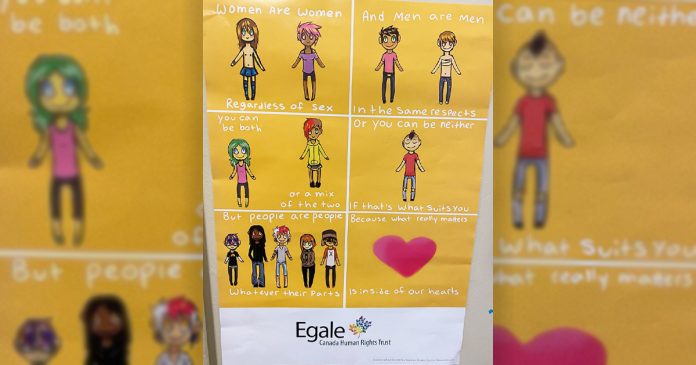 The workshops – run by the nonprofit Get REAL – were conducted at Forest Hill Public School following a “number of homophobic/transphobic incidents,” according to Toronto District School Board (TDSB) spokesman Ryan Bird.

The exact content of the workshops is unknown, as are the transphobic/homophobic incidents that reportedly justified them.

According to social media posts, however, students in grades 4-8 were subjected to training on how to diversify their social media, how to use the correct pronouns and how to neutralize language.

According to their website, the Get REAL Movement is a Canadian non-profit focussed on combatting 2SLGBTQ+ discrimination, racism and bullying in schools.

Judging from the bios of the team, many appear to be young activists who use unconventional pronouns. Several declare themselves either gay, trans or non-binary.

A few weeks before the workshops, a poster was put up in the K-8 school promoting transgendered, nonbinary and gender diverse students.

The poster, created by Egale Canada, showed pictures of a young student – seemingly transitioning from male to female — with a flat chest. There was also a picture of a female student with binding over her pubescent breasts.

Several comments under the tweet were highly critical of the poster, noting it is much too confusing for young children and that the educrats are “gender pushers.”

Aparently TDSB Foresthill is unaware of the pulse of their community. This won't go over as well as they think.

One parent said she raised her concerns with the school’s principal, Adam Thompson, but that he brushed them off.

We brought this up to the Principal's attention 2 weeks ago. He brushed us off with "we have a committee that handles this". How could you allow this??? Superintendent / trustee – where are you on this?

These parents’ concerns are similar to those raised in January by Waterloo Regional District School Board (WRDSB) teacher Christine Burjoski to that board’s trustees. Burjoski, who has taught for 20 years, had made a presentation to the board questioning the value of two highly sexualized books about LGBT and trans issues widely available in elementary school libraries.

As I reported at the time, Burjoski wasn’t even allowed to finish her presentation. She was silenced, mocked, put on leave and subjected to a review – merely for stating what was on the minds of many parents.

I can’t help but wonder if the TDSB, WRDSB and other school boards are using such young kids as a bizarrely inappropriate social experiment.

It’s up to parents to pay more attention to what is occurring behind closed doors and demand answers from their school administrators.

Make no mistake – as a gay woman who spent far too many years in the closet, I have no issue with teaching respect to students.

Being gay is not a choice.

But for heaven’s sake, these are kids as young as nine years old who just want to play video games and buy candy at the nearby convenience store (I know because I’ve seen them there at lunchtime).

Let them be kids while they’re kids.