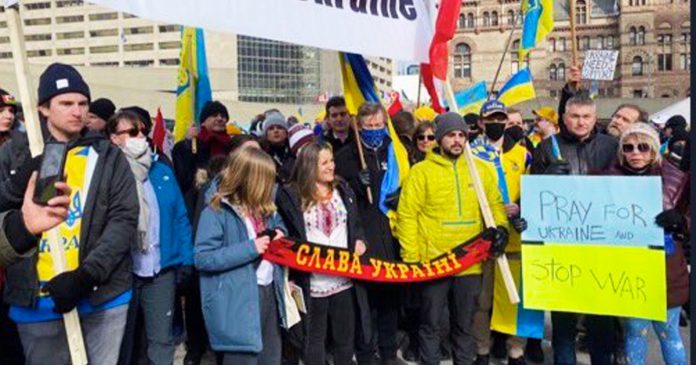 Deputy Prime Minister and former Minister of Foreign Affairs Chrystia Freeland was photographed on Sunday with a scarf promoting a far-right Ukrainian Nationalist movement linked to Neo-Nazis and extremism.

Remarkably, Freeland (or more likely, a member of her staff) posted the photo to her own official social media accounts, apparently ignorant of the radical far-right movement the scarf represents.

Freeland posted the photo, which also shows Toronto Mayor John Tory, to her Twitter and Instagram accounts on Monday morning. These posts were deleted, without any comment or acknowledgement of why they were taken down.

She reposted the same message on Twitter by mid-morning on Monday, but with a new photo where the scarf had been removed.

The red and black flag has historically represented the Bandera movement in Ukraine. Stepan Bandera was a Nationalist Ukrainian politician during the Second World War who is accused of war crimes and leading atrocities against Jewish and Polish people.

He is an incredibly polarizing political figure in Ukraine, as some view him a national hero who fought for Ukrainian independence.

Bandera helped create the Organization of Ukrainian Nationalists (UPA), an organization that legacy media reports have described as being “far-right” and “extremist” and who have been characterized as “Neo-Nazis.”

In April 2021, Euro News described Bandera and the UPA as Nazi-collaborators and war criminals.

“Bandera, Shukhevych, and the UPA are controversial for several reasons. Critics point to the mass killings of up to 100,000 Jews and Poles and the fact that UPA cooperated with Nazi Germany at the beginning of WW2 until it became clear that Nazi Germany wouldn’t recognize Ukrainian independence.”

Chrystia Freeland describes herself as a Ukrainian-Canadian and has recently begun speaking and sharing posts in Ukrainian. She presents herself as a politically savvy international player who is incredibly well-versed in Ukrainian politics and culture.

It begs the question of why she would be willing to be in a photo, and then personally post it, with a flag representing a militant insurgency group and the Ukrainian Neo-Nazi-linked far-right.

“Some voices close to the Kremlin will predictably disparage Freeland’s appointment. In addition to being a critic of the current Russian government, she is also of Ukrainian heritage; some Russian voices like to accuse Canada’s government of being in thrall to a powerful Ukrainian diaspora. (In 2015, a spokesman for the Russian government-owned oil company Rosneft claimed that Canadian sanctions against Russia’s energy sector were inspired by ‘pro-Bandera’ lobbyists. Stepan Bandera was an anti-Soviet Ukrainian partisan who was allied with Nazi Germany for some time during the Second World War.)”

It also doesn’t help that “Freeland’s granddad was, indeed, a Nazi collaborator” in Ukraine, as reported by the Ottawa Citizen. He was the chief editor of a Nazi propaganda newspaper during the Second World War.

This all creates two major problems for Freeland and the Liberals.

The first is the tremendous double standard at play. Just weeks ago, Trudeau and his allies in the legacy media relentlessly smeared the Trucker Convoy as “Nazis” because of one still-unidentified provocateur who crashed the protest before quickly disappearing.

Trudeau infamously accused a Conservative MP of Jewish heritage of standing with “people who wave swastikas.”

They smeared an entire group by a single despicable flag spotted near the protest.

In the case of Freeland at the Ukrainian rally in Toronto, she wasn’t simply spotted at the same rally as a Nazi. She was literally holding the flag.

The second major problem this presents for Freeland and the Liberals is that they are opening themselves to smears and propaganda from the Putin regime.

When Putin announced his invasion into Ukraine, the justification he provided, in part, was to “De-Nazify” the country. Putin’s war efforts rely on propaganda presenting the Ukrainian government and its allies in the West (like Freeland) as supporting an extremist, far-right Nazi movement.

When a prominent Western leader is photographed with a banner that represents the Neo-Nazi movement, she is naively playing into Putin’s hands.

Freeland can scrub her own social media to her heart’s content, but her photo holding the red and black banner is making the rounds on social media and is being used on other news sites, including NPR.

This is a significant misstep by Freeland. Let’s see if anyone in the media notices or reports on it.