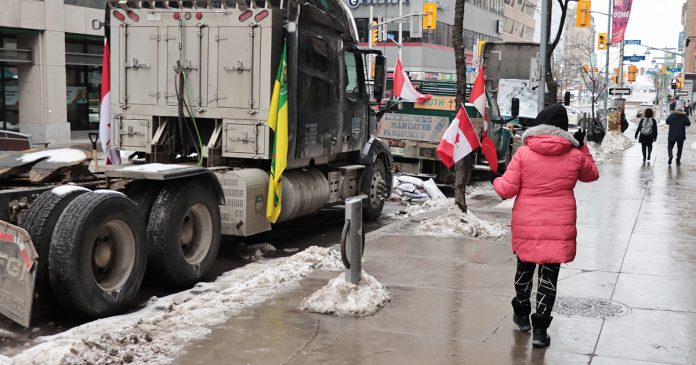 Members of Parliament heard on Thursday that the Trudeau cabinet’s claims that the Freedom Convoy was funded by foreign powers were false, according to Blacklock’s Reporter.

“Our records show 88% of donated funds originated in Canada and 86% of donors were from Canada,” said GoFundMe president Juan Benitez to the Standing Committee on Public Safety and National Security in the House of Commons on Thursday.

Donors contributed $10.1 million to the Freedom Convoy by the time GoFundMe suspended the crowdfunding page on Feb. 4.

Benitez said that foreign funding was insignificant and that he could make that determination through credit card information. He said there was no evidence that any neo-Nazi or criminal organizations contributed to the Freedom Convoy.

GoFundMe’s suspension led to donors then contributing $10.6 million to a crowdfunding page on GiveSendGo before it too was frozen. GiveSendGo executives testified that about 63% of those contributions were from Canada.

“Most of the donations were under a hundred dollars,” said GiveSendGo co-founder Jacob Wells. “It’s pretty consistent across the board.”

“There has been a lot of rhetoric that we’ve heard in Parliament about foreign financing, that this was a foreign-funded campaign to undermine Canada’s national security, but we see numbers that 88% of donors were Canadians,” said Lloyd.

Multiple cabinet ministers had claimed in February that foreign extremists were using the Freedom Convoy to threaten Canadian democracy.

Foreign funding was also one of the reasons Trudeau had cited for invoking the Emergencies Act on Feb. 14, which saw the government grant itself sweeping financial powers to track convoy contributions and freeze bank accounts.

“It is important that we follow the money because for a number of weeks there have been alarm bells going off about the rate at which the leaders have been able to raise significant funds, much of which has been raised from abroad,” said public safety minister Marco Mendicino.

Emergency preparedness minister Bill Blair had said that foreign powers were hoping to use the Freedom Convoy to harm Canadians.

“We cannot leave anyone with the impression our democracy is negotiable or subject to efforts of appeasement,” said Blair. “We will not let any foreign entities that seek to harm Canada or Canadians or erode trust in our democratic institutions or question the legitimacy of our democracy.”