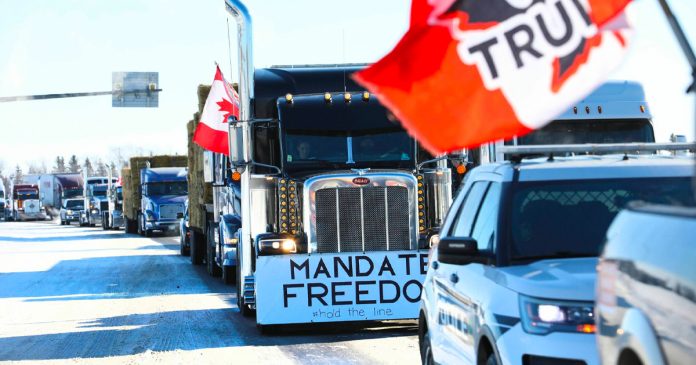 The fundraising platform GiveSendGo has announced that it will be refunding the remaining donations for the trucker Freedom Convoy, saying the Canadian government is “trying to seize the funds to redistribute.”

According to a statement posted on their official Twitter account, GiveSendGo said that the move was to protect donors and the intended purposes of their donations.

“The Canadian government has criminalized the receiving of funds from the Canadian trucker campaigns and now are trying to seize the funds to redistribute. In order to protect our Givers and the intended purposes of their gifts, funds not already transferred to the recipients from the ‘Freedom Trucker Convoy’ campaign will be refunded,” GiveSendGo wrote.

GiveSendGo is the target of an ongoing class-action lawsuit by Ottawa residents against fundraisers involved with the convoy.

Lawyers have already obtained a court injunction to freeze convoy funds and have attempted to apply the order to funds that have yet to be distributed by the platform.

However, co-founder of the Christian fundraising platform Jacob Wells has argued that GiveSendGo’s terms of service give the company power to return the funds to donors if it so wishes.

Despite arguments that GiveSendGo was in breach of a government order freezing the distribution of funding donations, Ontario Superior Court Justice Calum MacLeod stated that the injunction was only meant to apply to funds already in the possession of convoy organizers.

GiveSendGo was the victim of a hack last month after criminals leaked the private information of thousands of donors, some of whom were then targeted by harassment and threats.

Conservative MP James Bezan has asked the federal privacy commissioner to look into the matter, calling it a “blatant breach of privacy.”

Despite claims by the Liberal government that the convoy movement was foreign-funded, fundraising platform executives testifying before the Commons public safety committee stated that a majority of funds were from Canadian donors.

This is a developing story that will be updated.