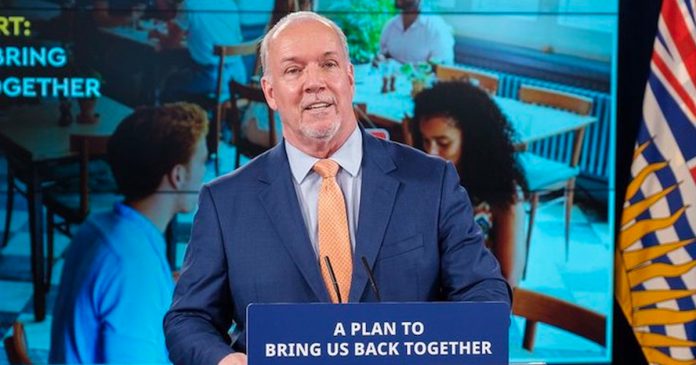 A major convoy protest planned for Victoria failed to materialize on Monday, but not without NDP Premier John Horgan letting British Columbians know what he thought of people protesting his government’s ongoing COVID restrictions.

“If people want to drive around and honk their horns, then fill your boots,” said Horgan on Friday. “And at $2.00 a litre (for gas) that’s not only bad judgment, that’s stupidity.”

“Turn on your television and look at what’s happening in Ukraine right now, go on the internet and do some research on the profound impacts of inequality in our societies around the world and then maybe you have something to get excited about.”

Last week, B.C. became the last province to announce it would relax pandemic restrictions, including dropping masks on Friday and vaccine passports by April 8, the latter going ahead “assuming conditions continue to improve.” Before this, the provisional deadline for the passports had been June 30.

Even so, Dr. Bonnie Henry hinted restrictions were likely to return in the fall.

B.C. also continues to terminate government workers who were forced onto unpaid leave last fall after refusing to comply with vaccine mandates, even as other provinces including Alberta and Nova Scotia are welcoming unvaccinated workers back.

The lawn of B.C.’s legislature has hosted protests against pandemic restrictions for weekends on end, including one on Jan. 29 that saw former Newfoundland premier and Charter of Rights signatory Brian Peckford speak out against vaccine mandates and travel bans.

Word began to circulate two weeks ago that another large-scale convoy protest – dubbed Bearhug B.C. – was headed for Victoria after Canada Unity organizer James Bauder posted a video calling on the freedom convoy’s western fleet to converge on B.C.’s capital.

“Canada, we really do have to support B.C. right now,” Bauder had said on Mar. 3. “It’s one of the hardest-hit provinces.”

Bauder had called on western truckers and other protesters to return from Ontario, passing through a number of cities before arriving in Victoria on Mar. 14. Envisioning several hundred trucks performing multiple “rolling convoys” over two to three months, Bauder nonetheless insisted that “everything that we’re going to do is going to be 100% legal.”

B.C. government, Victoria police and other officials had nonetheless prepared for major demonstrations on Monday, including reported discussions involving B.C. Ferries to potentially prevent demonstrators from crossing to Vancouver Island.

Speaking to media before the weekend, Premier Horgan said that if people wanted to come to Victoria to protest health measures by honking their horns, “then I feel really sad for you.”

Horgan said that demonstrators got more attention than they deserved, adding that 94% of adults in B.C. were vaccinated (in Jan. 2021, Henry had announced that a target vaccination threshold for COVID-19 herd immunity was around 70%).

He confirmed he would continue to wear his own mask in public, being immunocompromised and having recently undergone the last of 35 radiation sessions following surgery for throat cancer.

Speaking to Global News on Monday about the anticipated Victoria convoy, NDP MP and former Victoria city councillor Laurel Collins said that demonstrations in Ottawa had been neither legal nor acceptable.

“You know, there was attempted arson,” she said. “Citizens in Ottawa were subjected to noise at all hours of the night. People were harassed on the streets. This was not a peaceful demonstration. It was an occupation. And, you know, the organizers, many who had connections to far right extremism, were very clear in the lead-up that they actually wanted to overthrow the government.”

Despite Collins’s claims, the “attempted arson” was blamed on the truckers without any evidence, while at least one resident reported “(t)here is no honking at night” (nor at all after the Feb. 8 injunction).

Collins maintained that the way to get out of the pandemic was to “continue to follow public health advice” adding that developing countries’ low access to vaccines was “why we continue to see variants arise.”

Victoria was relatively quiet on Monday afternoon, with Lower Mainland media reporting that Bearhug B.C. had possibly redirected its efforts in the wake of the province’s loosened restrictions.