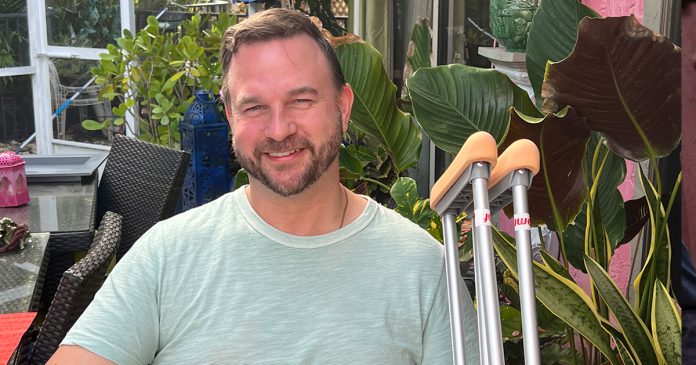 Despite totalling his car, shattering his ankle on an icy Ottawa sidewalk and having his bank accounts frozen for seven days, one of the organizers of the Freedom Convoy has said it was all a smashing success.

In a sit-down interview with True North this week, Benjamin Dichter said the three-week-long protest had pressured our political leaders to end the COVID mandates.

“We 100% moved the needle,” Dichter said. “People are now starting to see how far our politicians have gone off the cliff… some people are starting to wake up.”

Dichter – who is hobbling around on crutches until the end of April – said he sees himself as just an “ordinary dude with a truck” and that the whole experience was a “blast.”

He said it was a credit to the cause that despite the obstacles thrown in front of them by the banks and the Liberal government, the Freedom Convoy managed to raise $10.1 million through the GoFundMe fundraising platform – until the funds were frozen by the TD bank.

He said that GiveSendGo – the Christian alternative to GoFundMe – subsequently reached out to the convoy, and through them they managed to raise $9-million in one drive and another $500,000 in smaller drives.

Dichter is from Toronto and formerly ran for the federal Conservatives in the Toronto-Danforth riding, but what isn’t well known is that he bought a truck during the pandemic and drove it for a living. His work consisted of going back and forth across the border delivering paper products, without having to show his vaccination papers or a QR code.

He said that what really got him upset was the enforcement of the QR codes and the COVID digital passport – things, he said, he was concerned would become the basis for “an entire surveillance state.”

“That was going to lead to massive tracking beyond what is normally done,” he said.

Dichter said he thinks the Freedom Convoy made people realize just how fake the media is. According to him, their dishonesty was why only select independent outlets were invited to their press conferences in Ottawa.

“If we invited them (the legacy media), they’d just call us names,” he said. “Why (would we) waste our time subjecting ourselves to their BS?”

Dichter laughed when I told him about the conferences and lectures now being held by journalists to complain about “mean tweets” and the hatred some say they experienced at the hands of the truckers.

He also said he thought that Prime Minister Justin Trudeau had behaved predictably at the outset – first hiding out and then coming out to describe the truckers as neo-Nazis.

As for Trudeau’s implementation of the Emergencies Act – Dichter says even he was surprised with that one. He said he realizes now that even extremists “always double down,” and he feels that Trudeau’s long-time friend and advisor Gerald Butts was behind it.

Dichter said it was when the convoy’s GiveSendGo fundraiser was hacked and donors started seeing their names on social media and having their bank accounts frozen that people really got scared.

He said his own personal and corporate accounts were frozen for seven days – a situation he discovered when he tried to pay for an Uber Eats order one night. His entire banking history had been erased, he said, only to be reinstated when the Emergencies Act was revoked on Feb. 23.

Dichter said he survived with the help of a friend for seven days.

“There is nothing like being targeted by your own government for alleged money laundering,” he said. “Canada has become worse than a third-world banana republic.”

Even now Dichter says he is concerned that he’s been flagged by the big banks – adding that this is a good reason to pursue Bitcoin.

He insisted that the convoy was only the start of his efforts to wake Canadians up to what is happening in our country. For now, though, he has to wait out the recuperation of his ankle surgery in February, having broken both the fibula and tibia slipping on an Ottawa sidewalk.

He admitted he’s not a good patient.

He is so tenacious, in fact, he said he crutched up to Parliament Hill in the snow 24 hours after having the ankle repaired.

“I was trying to make sure these people didn’t get into the mindset of being anxious,” he said, referring to the efforts of the government and the legacy media to demonize and disperse the movement.

“I told them not to let them divide them.”