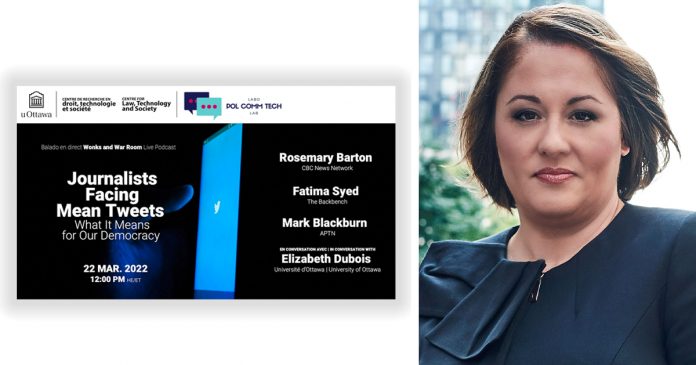 The University of Ottawa’s Centre for Law Technology, and Society is hosting a panel on Tuesday called “Journalists Facing Mean Tweets: What It Means for Our Democracy,” featuring CBC’s Rosemary Barton.

The event will be a live recording of associate professor Elizabeth Dubois’s podcast, “The Wonks and War Rooms.”

The university describes the event as a conversation “to discuss online harassment, discrediting journalism, and what incivility means for our democratic systems.”

“It’s no secret that journalists have faced increasing harassment over the past few years,” it adds.

The university cites an Ipsos survey of Canadian journalists from Nov. 2021 where 72% say they experienced harassment of some form during the past year, with 65% saying the abuse was online.

“From personal attacks to accusations of bias or being ‘fake news,’ negativity directed at journalists can have a serious impact on when and how credible information is shared and found,” says the University of Ottawa.

Panellists will discuss online spaces which are “increasingly toxic” as well as tackling a series of “tricky” questions.

These questions include, “what can we do to cultivate civic engagement between individuals and news media? What counts as incivility and who is a troll? How can we encourage broad civic engagement while discouraging harassment? How do we create safer environments for journalists?”

Barton, who serves as CBC’s chief political correspondent, has faced controversy in the past, with some accusing her of bias.

Barton’s name appeared as an applicant in a CBC lawsuit against the Conservative Party of Canada (CPC) in Oct. 2019 when the government broadcaster had sued the CPC over an online election ad. CBC lost the lawsuit after it was dismissed by a federal court, with the Conservative Party calling the decision a “clear win for democracy.”

Barton was also criticized for her town halls during the 2021 federal election, where she was accused of being softer with Liberal leader Justin Trudeau than with Conservative leader Erin O’Toole.

“The questions Trudeau faced were absurdly soft, some of the ‘undecided voters’ were openly Liberal and Barton didn’t push back nearly as hard as she did against the Conservative Leader,” said True North’s Candice Malcolm.

Barton has also been observed to have friendly interactions with Trudeau on Twitter, and even took a selfie with him.

“Can someone tell the Premier 1.5 AZ (AstraZeneca) is coming next week. On Tuesday,” Barton tweeted.

Barton also came under fire in 2020 for laughing at a law student who said he would not mind working on a farm to support Canadians and himself during the COVID-19 pandemic.

Unlike Carleton University’s “Journalism under Siege” event, which was held in person with proof of vaccination and capacity limits on Mar. 8, it appears that “Journalists Facing Mean Tweets” will be held virtually.