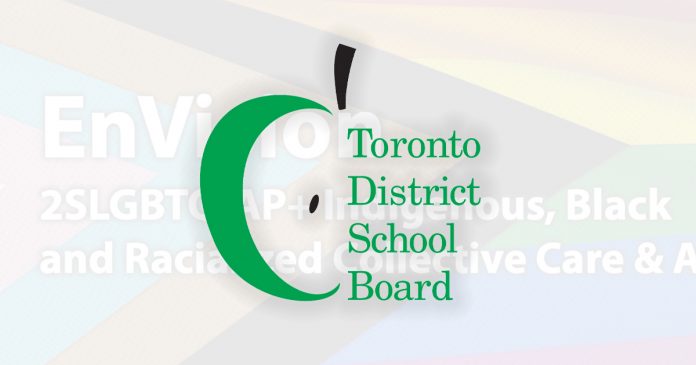 Toronto District School Board (TDSB) officials have invited kids as young as 11 to a conference this Tuesday and Wednesday to discuss issues facing LGBTQ, pansexual, intersexual and asexual students.

The EnVision virtual conference is described as an annual gathering for “2SLGBTQIAP+ Elementary and Secondary students and their allies and co-conspirators” to discuss homophobia and transphobia in Ontario.

One of the figures behind Envision is TDSB student equity program advisor Javier Davila – the self-described “gay latine transformer” who was investigated for distributing two virulently anti-Israel manuals to board teachers last year.

According to the TDSB program for the event, the focus of this year’s conference is to address Indigenous, black and racialized collective care and activism.

The conference has been held for several years, but this appears to be the first year that the initials “A” and “P” have been added to what were formerly designated “2SLGBTQ” events. “A” stands for asexual, which refers to people who reportedly experience no sexual attraction towards anyone, while “P” is for pansexual, which refers to people attracted to all sexes. Last year, “I” – or “intersex” – was added to signify those born with both female and male parts.

The so-called “free” conference – which gives staff and students an entire day off classroom learning if they attend all the workshops – has been organized by the Equity-Anti-Racism and Anti-Oppression team at the TDSB.

The materials say 1,000 students can participate in the launch, which will feature a performance by the Toronto Kiki Ballroom Alliance.

The dance group – which was founded in 2010 by two Torontonians named Twysted Miyake-Mugler and Motha Vixen – is described as a space using Ballroom Arts to “nurture the needs of Black and other radicalized” LGBTQI+ youth.

Both their Facebook and Instagram pages include highly sexualized dances and pictures of masked semi-nude members, all of which is far too sophisticated and inappropriate for middle-school students.

But it gets better.

The program says both elementary and secondary students who participate in the conference will be invited to use virtual platforms to ask questions and explore how they can celebrate gender and sexual diversity in schools and beyond.

To help them do so, Dr Andrew B. Campbell (Dr. ABC and a he/him) has been invited to present. He is described as a motivational speaker who has a PhD in educational leadership, policy and diversity who has taught in Jamaica, The Bahamas and Canada.

One of his books, The Invisible Student in the Jamaican Classroom (2018), is described on Amazon as sharing the experiences of gay Jamaican males with formal schooling.

Campbell indicates that when he was young, he did not see “any gay role models” except for on TV, or any successful black gay men that would have given him “courage and hope to know he could become more than what the school and neighbourhood bully said he would become.”

Another speaker scheduled for the virtual conference is Tru Wilson (she/they) who earned notoriety at age 10 in Vancouver when she filed a human rights complaint against her Catholic school for not supporting her transition from male to female.

According to the TDSB program, Wilson – now 18 – has become a “proud and voracious speaker” for trans rights.

“In 2015, (Tru) was recognized by Vancouver magazine as one of the city’s 50 most powerful and influential people,” the program says, noting she now shares her story to educate and inspire others.

The program claims that EnVision is best for students who want to start a Gender and Sexuality Alliance, a Queer-Straight Alliance, Gender Justice Group or Equity Club in their school. It is also reportedly for students who have an interest in advocating for anti-oppression, anti-hate and affirming “healthy relationships” in schools.

Anything but actually studying, it seems.

Just when I thought school boards had gone too far ramming gender equity, pronouns and sexual proclivities down the throats of kids who just want to play baseball, soccer, video games and the like, they double down and come up with something even more explicit.

We shouldn’t be surprised that this conference is a creation of the activist and non-classroom teachers at the TDSB. At the same time, parents with kids in middle school should be absolutely outraged that these radicals are still pushing their sexualized agenda on students, even after that agenda has been so continuously exposed.

As loud as they’ve been, it seems they’ll have to speak up louder.