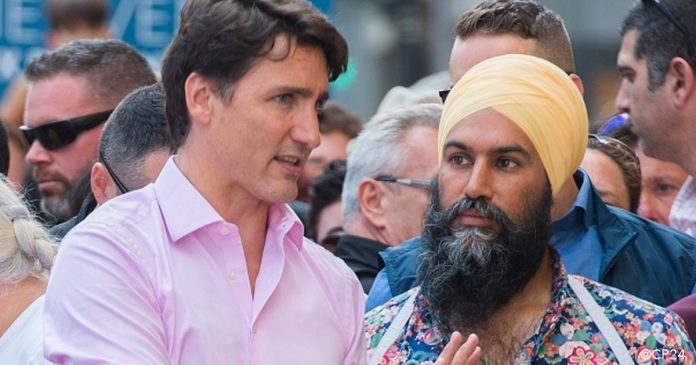 Some anonymous Liberal MPs are expressing disapproval over the recent “confidence and supply agreement” between Prime Minister Justin Trudeau and Jagmeet Singh that will see the NDP prop up Trudeau’s Liberals until 2025.

According to the Hill Times, Trudeau and his cabinet did not consult the Liberal caucus in the decision-making process surrounding the deal with the NDP announced Mar. 22. Sources say that the only forewarning about the agreement was an abnormally scheduled caucus meeting.

In an apparent effort to stifle debate within the Liberal caucus, Liberal national caucus chair Brenda Shanahan reportedly scheduled the meeting two hours before it occurred while packing the caucus meeting agenda so that discussion on the agreement could be limited.

While Jagmeet Singh allowed his NDP caucus to vote on the agreement, Trudeau apparently did not.

“There’s the irony that this was kept from members of caucus until it actually was a fait accompli,” one disgruntled Liberal MP said  “And the irony here is, even though if the details of that nature were kept from our caucus, NDP MPs actually got to have a say on it. So that juxtaposition, in my opinion, is very, very troubling.

“But that’s how our government has been behaving since 2015.”

Since that year – the only Liberal majority under Trudeau – the Liberal Party has earned a smaller share of the popular vote with each subsequent election. Some Liberal MPs are reportedly worried that abandoning the centre of the political spectrum and cooperating with the far-left NDP party could lead the Conservative Party to victory.

As Trudeau’s party continues to move in a more left-wing direction, MPs are concerned that ‘blue liberals’ will find a home with the Conservative Party even if a right-wing candidate becomes the CPC leader.

“The more you move to the left, the more you start to lose some blue Liberals,” one Liberal MP said. “That’s been a big problem for Liberals since 2015.”

While Canadians are trying to figure out the implications of the “confidence and supply agreement,” Liberal MPs are apparently unsure just to what extent the Liberals and NDP are to cooperate in committee work, drafting bills and more.

The agreement ensures that the NDP supports the Liberal Party as long as the Liberals commit to implementing national dental care and pharma care programs. According to the sources who spoke to the Hill Times, Liberal MPs are also raising concerns about adding to the already growing budgets and deficits exacerbated by pandemic spending programs.

The agreement between the Liberals and NDP pledges to increase spending on social programs, with no plan on how the government will pay for them.

With inflation climbing to 5.7% – the highest in more than thirty years – and with government debts and deficits breaking records, there is real concern that increased spending will add to inflationary pressures.