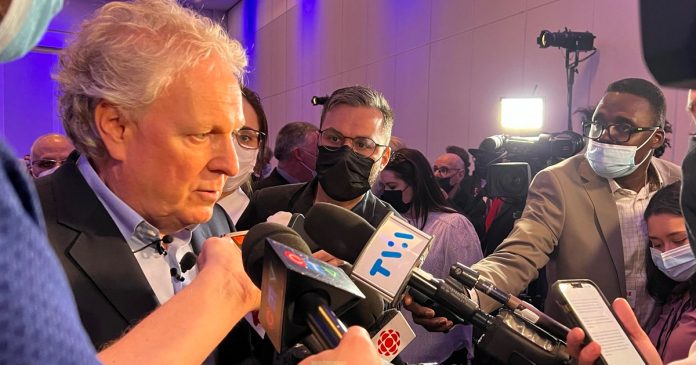 In a Nova Scotia campaign stop on Monday, Charest pledged to increase the military’s funding to meet the G7’s target of at least 2% of the nation’s GDP on defence. The announcement comes as the Russian invasion of Ukraine triggered concerns by NATO that made spending on defence a renewed priority.

“We were left unprepared to support Ukraine against Russia’s invasion,” Charest said in a press release. “We also share an Arctic border with Russia. We must protect our sovereignty in the north.”

In light of the European conflict, countries including Germany – which have historically undershot NATO’s recommendation of spending 2% of GDP on defence – are quickly reversing course. In contrast, the Trudeau government has not made similar commitments.

Charest criticized the Trudeau government for not taking Canada’s military seriously, accusing them of underspending on their defence obligations and delaying their purchase of F-35 fighter jets.

“The irresponsible delay on beginning procurement of the F-35 is just one of many examples of critical purchases of essential military equipment and materiel left in the hands of the Liberal Party putting politics ahead of properly equipping our troops,” Charest said.  “A Jean Charest government will ensure that our national defence comes first.”

Such weakness, Charest argues, is why Canada has “(b)een left out of important strategic defence agreements involving Australia, the UK, and the US to counter the disruption and increasing aggression from China.”

Charest also mentioned how the Trudeau government has done little to combat “systemic and unfair obstacles” for women, minorities, and members of the LGTBQ+ community, saying that Canada needs safe and merit-based environments.

The Trudeau government has instead focused more on social initiatives within the Canadian Armed Forces, like creating the Advisory Panel on Systemic Racism and Discrimination in 2020, which greenlit the creation of ‘gender-neutral’ military uniforms.

Other commitments Charest made were to introduce a Canadian Armed Forces Service Benefits Act, invest in cybersecurity, fix Canada’s model for procurement of military servicemen and women and make sure that “(t)he right equipment gets to the right people.”

He also pledged to restore the pre-2006 Pension Act benefits “to ensure veterans in 2022 are looked after equal to or better than veterans of World War II, Korean War, and operations since.”