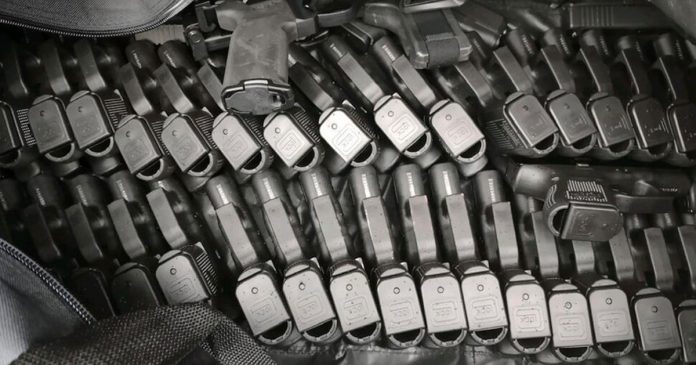 A 36-year-old man from Ottawa was arrested during a routine traffic stop on Sunday in Rochester, New York after he was found carrying an arsenal of illegal guns.

According to reports, police pulled over Badri Ahmed-Mohamed in a quiet neighbourhood for speeding.

“I was patrolling the Village and had a vehicle pass me at a high rate of speed,” said Officer Kyle Regal.

Soon after interacting with Ahmed-Mohamed – whom officers described as agitated and suspicious – police asked him if he had anything illegal in the car.

“As I went up to the vehicle, the driver seemed very suspicious and starting shaking,” Regal added. “I asked him if there was anything illegal in the vehicle, which he answered with ‘yes.’

“I had the gentleman exit the vehicle. He gave me consent to search the vehicle, and then that’s when I found the weapons in the trunk of the vehicle.”

According to local authorities, Ahmed-Mohamed was allegedly engaged in trafficking firearms from the US into Canada.

In 2020, the Liberal government banned over 1,500 different guns from being owned by law-abiding Canadians. Prime Minister Justin Trudeau justified the decision by claiming that the weapons were used to target humans specifically by criminals.

“These weapons were designed for one purpose and one purpose only — only to kill the largest amount of people in the shortest amount of time,” Trudeau said. “You don’t need an AR-15 to bring down a deer.”

The ban meant that Canadians could no longer buy, sell, import or transport these guns rendering them essentially useless.

Critics of the ban including Canadian Coalition of Firearm Rights CEO and Executive Director Rod Giltaca have said that the ban does very little to combat violent crime and illegal guns entering Canada.

“Of course, the government’s ban has had no effect on this kind of criminal activity. No serious person would claim it would. Criminals like this aren’t even aware of the government’s ban. In fact, this is the same government that provided reduced sentencing options including repealing mandatory minimums for these types of crimes in bill C22. Fortunately, this bill was not passed because of the 2021 election.”

Giltaca added that if governments were serious about combatting gun crime, they would not obsessively focus on targeting law-abiding citizens.

“The government’s obsessive focus on licensed gun owners has made Canada a more accommodating environment for this kind of criminal activity and Canadians are less safe as a result,” he said.

“If you’re concerned with public safety, none of this makes any sense. Licensed, law-abiding Canadians are sick and tired of this,” said Giltaca. “The Liberals and law enforcement know who’s committing these crimes. They just need to get serious about addressing them.”

Despite initial claims that their gun ban didn’t apply to hunting and sporting rifles, the Liberals have recently admitted that it does.

A government notice read that “(s)takeholders raised concerns the Amnesty Order did not allow for the transportation of firearms that were previously non-restricted and used for sustenance hunting or to exercise a right under section 35 of the Constitution Act for maintenance purposes, for example for repair or sighting in preparation for hunting.”