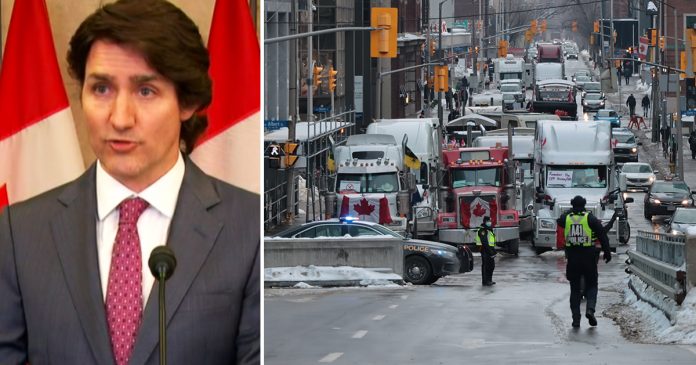 On Thursday, the Ottawa Police Service (OPS) issued a statement on a second man arrested for a Feb. 6 arson attempt on a downtown apartment building, revealing that 41-year-old Bartosz Wernick had nothing to do with the Freedom Convoy protests happening at the time.

Only two weeks ago, authorities said the same of Wernick’s alleged accomplice, 21-year-old Connor Russell McDonald. “There is no information indicating MCDONALD was involved in any way with the Convoy protest which was going on when this arson took place,” wrote the OPS on Mar. 21.

Despite the now undeniable absolution of the Freedom Convoy of an alleged attempt to burn down a building full of entrapped residents, the governing Ottawa establishment seems to have been replaced with crickets.

Ottawa Mayor Jim Watson was chief among those who blamed the convoy for the incident in the first place, declaring during a Feb. 7 city council meeting that the arson “clearly demonstrates the malicious intent” of the truckers.

“Yesterday we learned of a horrific story that clearly demonstrates the malicious intent of the protesters occupying our city,” said Watson. “On Sunday morning, two young men entered the lobby of the building on Lisgar St. where they proceeded to light fire starter bricks near the elevators before taping up the door handles so residents would struggle to get out during a fire.”

Throughout February, Liberal and NDP MPs (alongside the legacy media establishment) continued to insinuate that protesters had been involved in the incident, if not actually accuse them of responsibility.

The false claims not only litter the Hansard records of debate and committee proceedings in the House of Commons, but they were also repeated on social media and by pundits opining on the evils of the anti-restrictions protesters who had gathered in the capital.

NDP Leader Jagmeet Singh was the first to introduce the false accusation to the official record when he pointed to the incident as an “example” of the so-called commonplace violence at the protests.

“We saw an example of this violence with an attempted arson of a downtown apartment building, where people started a fire and taped the doors closed when they exited. I ask members to take a moment to think what that means. They had the forethought to set a fire and then tape the doors so no one could escape,” said Singh on Feb. 7.

The accusation was solidified when the Liberals called for a unanimous consent motion calling on the House to condemn “the arson attempts … by protesters on the streets of Ottawa.”

When the motion failed to pass without the support of the Conservatives, Liberal MP and attack dog Mark Gerretsen used it to beat the official opposition over the brow and accuse them of not wanting the protest to end.

“They knew what they were saying no to. One lone Conservative over there, obviously set up by the whip’s desk, probably with their head down, said no and rejected the unanimous consent motion on behalf of the Leader of the Opposition,” claimed Gerretsen. “It is clear that she does not want the protest to end for the same reasons the rest of the country does.”

The question remains – how did our political and legacy media class get it so wrong? Well, for one, it’s not the first time that the cart went before the horse and leaders who should know better used an unverified claim to score political points before facts could be established.

As far back as 2018, a fabricated hate crime by a young Muslim girl who claimed that an Asian man attacked her with scissors and cut up her hijab was broadcast to the entire country by none other than Prime Minister Justin Trudeau.

When the story was proven false, Trudeau went silent and refused to apologize despite calls from the Asian Canadian community. By then, though, the damage was done.

More recently, the internationally publicized stories concerning the “discoveries” of so-called mass graves at former residential school sites throughout Canada incited a similar response from the Ottawa political and media establishment before the facts emerged. To date, those findings have been clarified and proven to be largely misleading if not outright false to begin with.

These misleading reports led to nationwide grief spectacles and a revenge spree of arson and vandalism by radicals targeting Christian churches of all denominations.

The push to pin the attempted arson in Ottawa onto the Freedom Convoy betrays how much the government has and continues to rely on shoddy reporting and even social media to leap into action.

This is evident from the fact that the arson was immediately pinned to the convoy by a local resident who clearly had a gripe with the protest movement and its goals – in fact, the resident still maintained that the convoy was responsible in light of the contradicting facts provided by the OPS. Without further investigation, politicians took this claim and ran with it.

Instead of level-headed sobriety and patience, the federal government repeatedly made grave missteps due to misinformation spun by not only themselves but also the establishment press.

Looking through the parliamentary debate, it is clear that a hoax played a key role in justifying Trudeau’s first-ever use of the Emergencies Act, potentially setting a precedent for the regular use of government emergency powers to quash protests that are politically inconvenient.