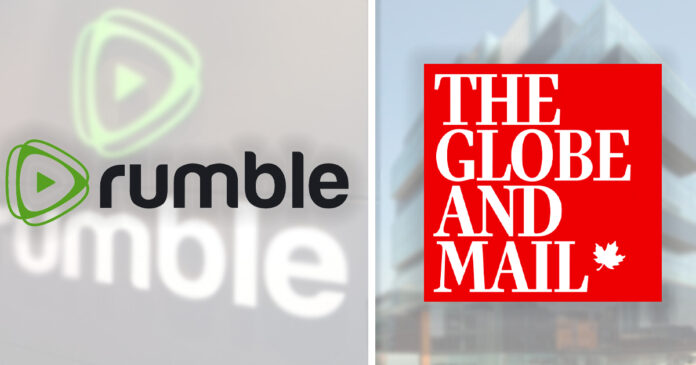 Online video platform Rumble slammed the Globe and Mail on Wednesday, accusing the legacy news outlet of supporting corporate-media-driven public censorship after a Globe journalist asked them why they haven’t blocked or limited Russian content like other sites.

“The Globe and Mail is demanding to know why we aren’t dutifully copying YouTube’s censorship. It is now common that we receive pressure from journalists demanding that we censor more,” Rumble wrote.

The first email writes, “YouTube announced a policy to prohibit content denying, minimizing or trivializing well-documented violent events in connection to Russia’s war in Ukraine.” Castaldo continued, asking, “(d)oes Rumble have any plan to enact policies similar to Youtube to deal with such content?”

In the next email, Castaldo mentioned two sources accusing Rumble of spreading “Kremlin lies and propaganda” and who said that their business model relies on “fringe groups who disseminate conspiracy theories and disinformation under the pretext of freedom of expression.”

He later wrote that he could provide examples of prominent creators such as Stew Peters and Alex Jones having produced videos “mirroring Russian government propaganda.”

Rumble replied with a scathing remark on corporate media and the big tech conglomerates that advocate for public censorship.

“There is a reason the public has radically turned against both the corporate media (such as your outlet) and Big Tech: because you have arrogantly claimed for yourselves the power to decide for the public what information they can and cannot be trusted to hear and what views they can and cannot express,” the platform tweeted.

Rumble then continued, saying, “(b)y stark contrast, the reason Rumble is growing so rapidly is because we trust adults to make decisions for themselves about what ideas they can express, and we trust them to make up their own minds after hearing all sides.”

“It cannot be overstated: (a) how surreal and dangerous it is that the leaders of the campaign for greater censorship are “journalists” (i.e., employees of large media corporations) and (b) how vital it is to have free speech platforms resisting this coercion to censor.”

MPs at the Commons heritage committee voted on Feb 28. to require the Canadian Radio Television Commission (CRTC) to prevent “state-controlled broadcasters” from airing in Canada.

The motion, which was put forward by Liberal MP Yvan Baker, called on cabinet to “issue an order of general application directing the Canadian Radio Television and Telecommunications Commission to a new broadcasting policy that would remove state-controlled broadcasters that spread disinformation and propaganda from the CRTC’s list of non-Canadian programming services and stations authorized for distribution, effectively removing Russia Today from Canadian airwaves.”

Rumble’s Founder and CEO is Chris Pavlovski, a Canadian who now runs the company out of Florida, USA.