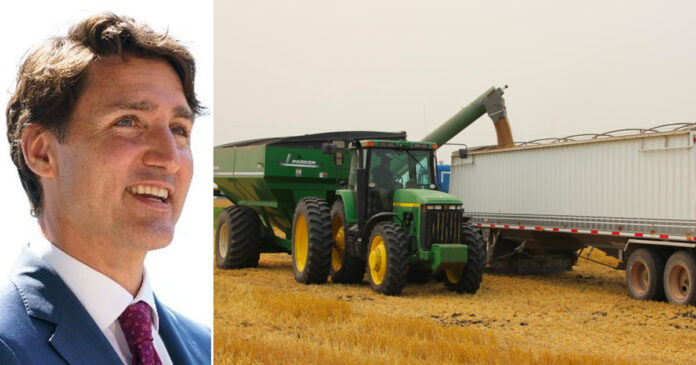 A Trudeau government report is putting farmers next on the carbon emissions chopping block, using UN data that accuses Canadian grain growers of producing crops with the highest “emissions intensity” in the world.

A new “discussion document” released by Agriculture and Agri-Food Canada titled “Reducing emissions arising from the application of fertilizer in Canada’s agriculture sector” singles out wheat, barley and other cereal producers for emission reductions.

The report outlines a framework to meet Prime Minister Justin Trudeau’s 2020 climate plan target to reduce greenhouse gas emissions in the agriculture sector by 30% below 2020 levels within ten years.

“The fertilizer target’s objective is to contribute to lower GHG emissions from the agriculture sector, building on and leveraging public and private programs and initiatives,” Agriculture Canada writes. “The target applies to both direct (following fertilizer application) and indirect (from nitrogen leached from fields and volatilized to the atmosphere as ammonia) emissions from the application of fertilizer.”

Agriculture Canada goes on to accuse cereal farmers of having “one of the highest levels of emissions intensity” among exporting countries. The claim refers to data gathered by the Food and Agriculture Organization of the United Nations (FAO) that puts Canada at the top of the list.

“Available data show that Canadian cereal production likely has one of the highest levels of emissions intensity (amount of GHGs emitted per unit of product) amongst major exporting countries,” Agriculture Canada claims. “Canada’s emission intensity for cereals in 2017 is higher than those reported for the United States, the European Union and (other regions).”

Industry leaders including President of the Western Canadian Wheat Growers Gunter Jochum have disputed the federal government’s claim about the greenhouse gas output of farmers. In an interview with True North, Jochum questioned the validity of the data, saying there has yet to be any reliable measurement of emissions on fertilizer use by farmers in Canada.

“I would like to know where they got their facts from,” said Jochum. “I believe those facts were entirely made up because in Canada we don’t even have a baseline as to what the true emissions are.”

“Now there’s also several forms of fertilizer that we use on farms, and some of them actually have very little nitrous oxide emissions. Then the other fact is, it depends on how the fertilizer is applied on farms, and there’s many different ways. Across Western Canada, we are at the forefront of applying fertilizer properly.”

“Until we have those (measurements) I’m very suspect to the government making bold statements like that, which I find quite ludicrous,” Jochum continued. “It’s not reasonable at all. I don’t think it’s a good idea to put any kind of cap on fertilizer manufacturing or fertilizer use for that matter.”

In 2020 The Parliamentary Budget Office (PBO) estimated that the federal carbon tax would cost Canadian farmers an estimated $235 million by 2025. At the time Conservative MP Philip Lawrence told parliament that farmers were sending him “exorbitant bills” for the carbon tax totalling between “$10,000 to $20,000.”

A more recent PBO report on Bill C-206 which would exempt farming fuel from the carbon levy found that it could save the sector up to $1.1 billion over a ten-year period.

On the fertilizer emissions cap for farmers, MP Lawrence told True North that the move could have dire consequences on future yields by already burdened farmers.

“For farmers to meet emission reduction targets they will require significant capital to invest in more sustainable technologies,” said Lawrence in an emailed statement. “By imposing greater and greater burdens on our farmers, the government is actually making it more difficult for farmers to reduce their emissions.”

As reported by True North, at a time when fertilizer prices are through the roof, consumers are increasingly shouldering the burden in the form of higher costs at the grocery store. Additional concerns include a trucker shortage that could triple by next year according to the National Cattle Feeders’ Association and the ongoing economic repercussions of Russia’s invasion of Ukraine.

Jochum also stated that Prime Minister Justin Trudeau’s stated goals to supply the world with agricultural products at a time of increasing uncertainty and war were inconsistent with the targets he places on domestic producers.

“I don’t think we can afford to cut back any production without affecting the price of food, and our prime minister – I think it was a few weeks ago when he was in Europe – made an address (where) he said that Canada must step up and produce as much as we can in order to make up the shortfall from the Russian-Ukrainian war,” said Jochum.

“So if our prime minister wants to cut back fertilizer use on Canadian farms, how on earth are we going to maximize production?”