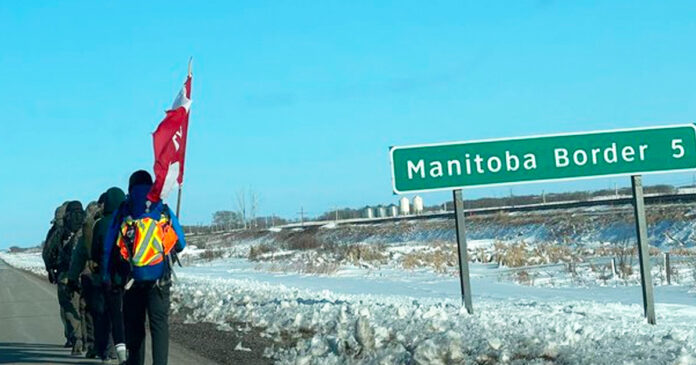 Canadian Armed Forces (CAF) veteran James Topp has crossed from Saskatchewan into Manitoba, reaching the second-to-last province of his protest march to Ottawa and facing the nastiest weather his team has seen yet.

Topp gave an update just outside of the village of Kirkella before calling it a day on Tuesday evening.

“Well, it’s been another amazing day, and met some great people,” he said. “And we say goodbye to Saskatchewan and hello to Manitoba for the next – foreseeable – future.”

“Thanks everybody in Saskatchewan. It was a hell of a ride. And like I said in my other video, time for another province to abuse me with weird weather.”

Topp entered Saskatchewan on Apr. 9 and soon ran into a massive blizzard that blanketed some areas of the province with as much as 50cm of snow. The bad weather only continued during his two-week trek toward Manitoba, requiring him on days to call an early stop to his march in order to hunker down.

“This isn’t a suicide mission,” Topp said on Saturday amidst fierce winds. “It’s about us getting to Ottawa.”

Topp – a 28-year veteran of the CAF – is marching to the nation’s capital to protest government mandates during COVID. He began his trek from Vancouver’s B.C. Place on Feb. 20, the same day a joint force of national, provincial and municipal police ended the Freedom Convoy protests in Ottawa.

Having been forced from his job due to vaccine mandates, Topp told True North before he began that the truckers’ show of courage had brought him back from the brink of despair, and showed him what he owes to the working people who built this country.

His protest he has dedicated to all those who have suffered under vaccine mandates – whether those who lost their jobs, those who were coerced into getting the shots, or those who saw their relationships damaged due to their vaccination status.

His goals – and progress – can be found on his website, CanadaMarches.ca.

Topp also spoke to True North’s Andrew Lawton from the road on Apr. 21.

Topp intends to reach the National War Memorial in Ottawa some time in June, where he hopes politicians will meet with him and discuss with him the reasons behind his march.