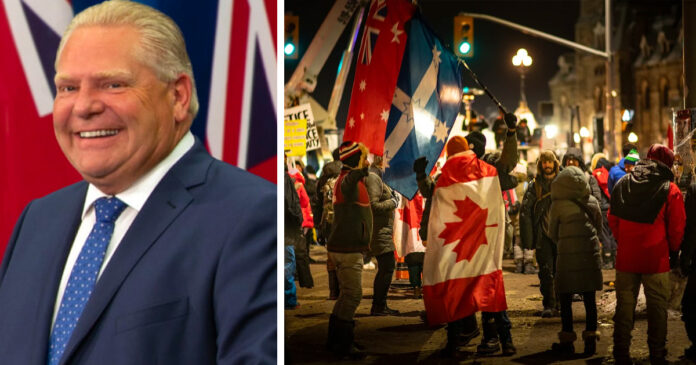 A former staffer for the Ontario government who was fired after donating $100 to the Freedom Convoy is suing Premier Doug Ford, his chief of staff and the Toronto Star journalists who reported her donation.

Marion Isabeau-Ringuette pledged the money to the Freedom Convoy’s GiveSendGo fundraiser in February. At the time, she worked as Director of Communications for Solicitor General Sylvia Jones,

After the convoy donation information was illegally leaked, journalists Charlie Pinkerton and Andy Takagi revealed that Isabeau-Ringuette was among the donors.

The statement of claim alleges that Isabeau-Ringuette was fired within minutes after journalists contacted her for comment. She is seeking almost $2 million in damages for having her career “destroyed.”

“The Ontario government responded to Pinkerton’s email expressly or implicitly confirming that Ms. Ringuette was the individual whose private confidential information had been stolen and advising Pinkerton that she had been fired from her position at the Ontario Public Service,” the  claim reads.

“In doing so, the Ontario government participated in the public disclosure of Ms. Ringuette’s stolen private confidential information and the invasion of her privacy. In under one-half hour, Ms. Ringuette’s promising career in the Ontario Public Service had been destroyed.”

According to her lawyers, Isabeau-Ringuette made the donation with “every expectation that her donation would be private and confidential” believing that it was “both legal and in accordance with Ontario government policy at the time it was made.”

Isabeau-Ringuette has also claimed that both Ford and Chief of Staff Jamie Wallace behaved in “the utmost bad faith” and “deliberately decided to confirm Ms. Ringuette’s identity and to advise that she was no longer an employee of the Ontario Public Service for their own personal political gain.”

“Premier Ford and James Wallace decided to end Ms. Ringuette’s career at the Ontario Public Service because they believed it to be politically expedient for them,” her lawyer wrote. “A provincial election was imminent and Premier Ford’s decision to terminate Ms. Ringuette’s employment was based on his and his campaign team’s belief that it would benefit him politically to, finally, oppose the Freedom Convoy.”

In total, Isabeau-Ringuette is seeking $450,000 from Ford, Wallace and the Crown over wrongful dismissal and for reputational damages along with $1.5 million from them and the Torstar over “invasion of privacy, public disclosure of private facts, damage to reputation, and emotional distress.”

Charges have not yet been proven in a court of law.