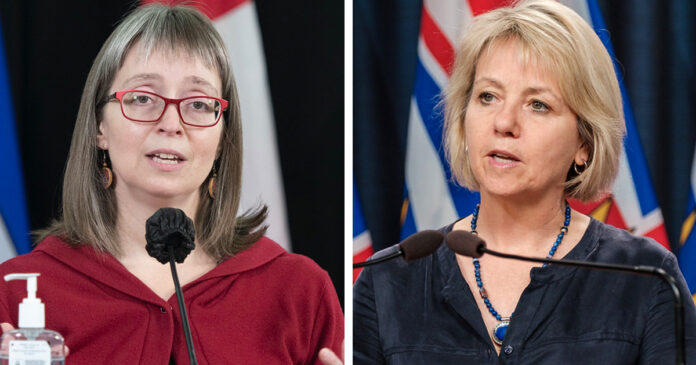 Two rulings in the past two weeks suggest that provincial health officers are not above the law, with judges in British Columbia and Alberta issuing crucial decisions against Dr. Bonnie Henry and Dr. Deena Hinshaw.

This week, a B.C. judge ruled that Henry must face a class-action constitutional challenge to several of her health orders under COVID-19, and that he would not throw the challenge out of court as Henry’s lawyers had requested.

The petition was put forward by the Canadian Society for the Advancement of Science in Public Policy (CSASPP) – an organization that says it includes at least 41 healthcare professionals. CSASPP argues that Henry’s mandatory vaccination orders for healthcare workers are unconstitutional, and that they did not provide reasonable alternatives to vaccination, including rapid testing and religious or medical exemptions.

It is one of several ongoing challenges to Henry’s pandemic regime, whose vaccine mandates have affected government workers across numerous sectors. The orders, which were put in place from October to November, made two shots of a COVID vaccine a requirement for employment.

Despite Henry’s lawyers arguing that CSASPP was a “purpose-built anti-COVID-19 measures entity” with no prior involvement in the issues of its petition, B.C. Supreme Court Justice Simon Coval ruled that Henry’s health orders did directly affect “a defined and identifiable group” and that the orders did therefore appear to affect their Charter rights.

Justice Coval also found that the petition looks at “important and complex” healthcare issues and that the society deserved legal standing – something Henry’s lawyer had also opposed.

“(CSASPP) alleges that its alternative proposals reflect a superior approach, taken in other Provinces and elsewhere around the world, much less intrusive on healthcare workers’ Charter rights. In my view, this raises substantial questions that meet the threshold of ‘clearly not frivolous.’”

The B.C. ruling echoes a trend from last week that saw an Alberta judge tell provincial health officer Dr. Deena Hinshaw that she could not use “cabinet confidentiality” to avoid answering questions in court about her discussions with government leaders.

Like Henry, Hinshaw is facing a civil suit over the constitutionality of her public health orders.

On Apr. 6, Hinshaw’s lawyers had used cabinet confidentiality to object to three questions about whether the Kenney government had directed any of her recommendations.  At the time, Romaine had asked Hinshaw the questions “in camera” (or behind closed doors), with neither counsel nor the public privy to the answers.

These questions included whether Premier Jason Kenney or cabinet members had ever directed her to impose more severe restrictions than she’d recommended, or to impose – against her own advice – stricter measures on certain groups such as churches, gyms or small businesses. Romaine also asked whether cabinet had ever rejected or ignored Hinshaw’s recommendations to loosen restrictions.

Romaine’s ruling means that Hinshaw’s answers must be revealed in open court, although it’s not yet known when that will happen. The government lawyers have also stated they’ll appeal the ordered disclosure.

In the past, Hinshaw had also often cited cabinet confidentiality in refusing to answer journalists’ questions about public health recommendations to the Alberta government.

Although both B.C. and Alberta mandated COVID shots for their public sector healthcare workers, Alberta rescinded the policy in March for workers already hired.

B.C. – which has already fired over 2500 healthcare workers – continues to terminate government workers over vaccine mandates, even as it seeks to fill gaps in its workforce by expediting the certification of foreign-trained nurses.