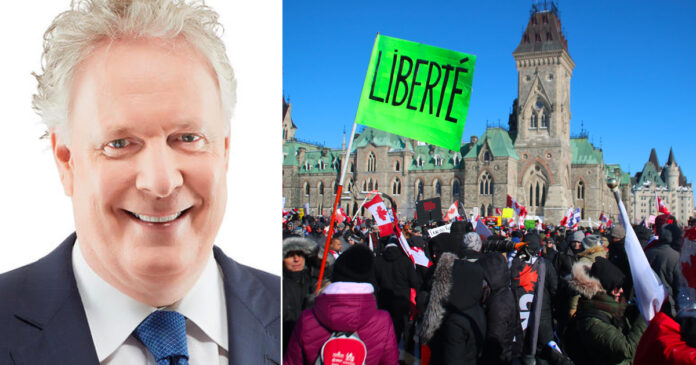 Conservative Party of Canada leadership candidate Jean Charest is claiming the Freedom Convoy “terrorized” and “laid siege to” Ottawa, and that his rival Pierre Poilievre “appeals to the fringe minority.”

The former Quebec Liberal premier made the claims in a campaign mail-out obtained by True North. It appears to have been sent exclusively to Ottawa residents, although Charest’s campaign team would not confirm – opting instead to say that “over 50,000 letters have been sent nationwide so far.”

“I am on the side of law-abiding Canadians” the mail-out reads, adding that “Pierre Poilievre is on the side of the lawbreakers and illegal blockaders who laid siege to YOUR CITY and our nation’s capital!!”

Charest adds in the mail-out that convoy participants – whom he refers to as “illegal blockaders” – terrorized residents, closed shops and businesses and disrupted daily commutes.

“But the worst part is these lawbreakers were cheered on by one high-profile – but recklessly irresponsible – local Member of Parliament, Pierre Poilievre, who now says he wants to be Prime Minister!”

Charest also writes that Poilievre isn’t a serious leader and would be unable to win a general election, linking him to the far right and claiming he appeals to “the fringe minority.”

“Pierre Poilievre is the Justin Trudeau of the far right, a celebrity who appeals to the fringe minority and is more focused on building his social media following than building an electable, mainstream Conservative Party,” writes Charest.

Charest also said that he is “holding Pierre Poilievre and his supporters accountable” for attempting to close Canada’s border and occupy Ottawa.

“The facts are clear. The downtown Ottawa core was occupied for weeks, critical infrastructure was blocked, businesses were forced to close, people’s ability to get to work was obstructed and all these cost taxpayers $375 million a day.”

Coates Mather added, however, that Charest does not believe that those who participated in the Freedom Convoy are part of a “fringe minority”  – a phrase first used by Prime Minister Justin Trudeau and then by Jean Charest while referring to some of Poilievre’s base.

“He believes the protests in Ottawa and elsewhere this winter expressed real frustration felt by many Canadians about how pandemic restrictions have been handled. He fully supports people’s individual rights to peaceful protests, but the bottom line is that laws were broken,” Coates Mather told True North.

Charest, who calls himself a “law-and-order Conservative,” said he agrees with Ontario premier Doug Ford introducing Bill 100 –  a new law that gives police the power to immediately address protest disruptions at land border crossings and international airports. The bill also gives police the ability to suspend drivers’ licences and vehicle permits and to seize the license plates of vehicles who take part in unlawful blockades.

Charest has promised to introduce a federal Critical Infrastructure Protection Act, which would make blockading, trespassing or interfering with critical infrastructure a criminal offense. He said he would also give law enforcement the ability to clear blockades without obtaining a court injunction.

Additionally, Charest’s proposal would “(a)mend the Income Tax Act to remove charitable status from any group that has accepted foreign funds and has engaged in action related to the new offenses created in this Act.”

Charest added that he was also against the “Shut Down Canada” movement that “tried to block resource development.”

The Charest campaign said, however, that he did not support Trudeau’s invocation of the Emergencies Act to clear the Freedom Convoy in February.

Charest “believes Trudeau’s implementation of the Emergencies Act in response to these protests was an overreach, completely unnecessary and divisive. It was a complete failure of leadership,” Coates Mather told True North.

Charest campaign co-chair Tasha Kheiriddin said she would have invoked the act to deal with the convoy had she been Prime Minister, in addition to calling in the military.

The Freedom Convoy was a protest against government COVID-19 mandates and restrictions, including those from the federal government. Charest said back in March that politicians needed to listen to “health experts” when it came to ending federal mandates.

This is not the first time that Charest has claimed that Pierre Poilievre supported an “illegal blockade.” He also made this claim at the 2022 Canada Strong and Free Conservative leadership debate, which resulted in him being booed by the audience.

True North has also previously reported that while Poilievre said he supported the “law-abiding and peaceful truckers”, there exists no record of him supporting border blockades.

The Conservative Party of Canada will choose its new leader on Sept. 10. The latest poll from Abacus Data puts Pierre Poilievre in first place with 48% support among Conservatives, and Jean Charest in second with 20% support.