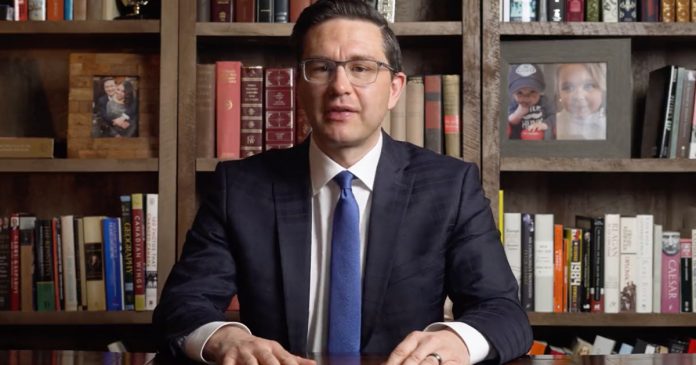 Despite Conservative Party of Canada (CPC) leadership candidate Jean Charest’s allegation that his opponent and perceived frontrunner Pierre Poilievre supported border blockades during the Freedom Convoy, a review of Poilievre’s statements shows no such position.

“I have a competitor by the name of Mr. Poilievre who supported, as you know, the blockade,” Charest told CTV News on Friday. “And if you want to be a leader in this country and a legislator, you can’t make laws and break laws.”

Charest also continued his attack in a recent Global News interview where he stated “everyone knows that Pierre Poilievre supported the blockades.”

To assess Charest’s claims, True North reviewed all of Poilievre’s statements and tweets throughout the length of the Freedom Convoy protests. We have found no record of the Ontario MP supporting border blockades or other illegal acts.

Poilievre made his position clear in the House of Commons when he stated that those engaging in blockades should be held personally responsible for their conduct.

“From the very beginning I stated that every single person who acts inappropriately, makes racist comments or engages in unlawfulness or blockades should be personally responsible for their conduct. That is something I would uphold as leader and as prime minister,” Poilievre said on Feb. 20

That same day, when he was asked by a Liberal MP whether he was concerned about the harmful impacts blockades would have, Poilievre answered in the affirmative.

“Am I concerned about the people who have been harmed by blockades? Absolutely. That is why I am so disappointed the Prime Minister caused these blockades in the first place,” said Poilevre.

Poilievre has been extensively quoted by the media disavowing unsavoury and illegal aspects of the protests, saying that he disagrees with anyone engaging in breaking the law.

A few days after the convoy began pouring into Ottawa, Poilievre blasted the legacy media for painting peaceful protesters as extremists by cherry picking the most distasteful elements.

“Whenever you have five or ten thousand people who are part of any group, you’re bound to have a number who have or say unacceptable things and they should be individually responsible for the things they say and do,” Poilievre said on Jan. 27.

“But that doesn’t mean we disparage the thousands of hardworking, law-abiding and peaceful truckers who quite frankly have kept all of you alive for the last two years by filling your grocery shelves with the food that you eat and filling your homes with the products that you rely upon.”

Not long after that interview, Poilievre took to Twitter to further denounce those who engaged in “reprehensible acts,” including “people flying evil confederate or Nazi flags.”

Throughout his supportive comments, Poilievre exclusively singled out the “truckers” or alternatively “peaceful Canadians,” and not those involved in blockades.

“I’m proud of the truckers, and I stand with them. They have reached a breaking point after two years of massive government overreach of a prime minister who insults and degrades anyone who disagrees with his heavy-handed approach,” Poilievre was quoted by the National Post on Feb. 11.

Even as early as Jan. 26, Poilievre told CBC News that his support for the convoy was limited to “peaceful protest by legitimate truckers who simply want to protect their livelihood.”

“We can simultaneously do that while denouncing anyone who promotes extremism,” said Poilievre.

In addition, news reports and social media posts of Poilievre meeting with protesters do not show him attending any blockades, but instead depict the MP standing in front of  semi-trucks, handing refreshments to truckers in their cabs and taking selfies with Ottawa residents.