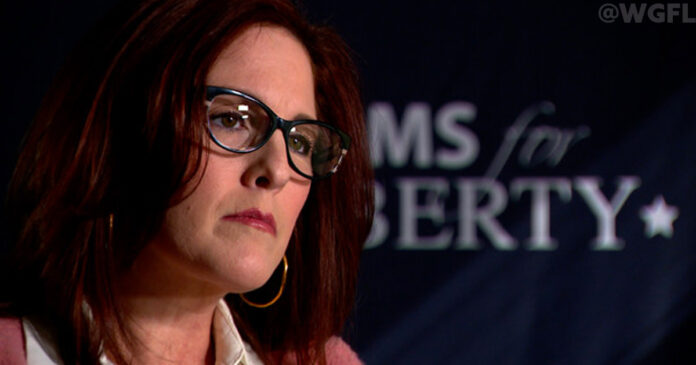 Florida mom Tiffany Justice said it was the Covid pandemic that “pulled back the curtain” and exposed to concerned parents all that’s wrong with public education in America.

In an exclusive interview with True North, the former school-trustee-turned-co-founder of an organization called Moms for Liberty said that when classes moved to online learning, she and other parents discovered how much “parental rights were being ignored.”

Suddenly parents all over the United States had a common fight – whether it was against  forced vaccinations of young students, quarantines and masking mandates or the influence of critical race theory and social emotional learning.

Justice and another Florida mom, Tina Descovich, founded Moms for Liberty when they realized that parents didn’t know how to “advocate” or “organize.

‘It was time for parents to have a voice,” she said.

Both women were school trustees in their respective districts – Justice in Florida’s Vero Beach – from 2016 to 2020. Both found the state of the education system to be truly “eye opening.”

Justice, who has four children – aged 17, 14, 12 and 10 – said she discovered that the first priority of school districts is to use tax dollars to protect themselves.

She said she saw the rampant inflation of grades (or social promotion) to produce higher graduation rates and make it appear that education officials were  much more successful than they are at teaching kids.

“Then they like to celebrate themselves when they don’t have any reason to,” she said during a lengthy Zoom interview from her Florida home.

She said that she saw the introduction of social-emotional learning and Critical Race Theory in schools – both of which, she said, were created to provide an “excuse for educational failure.”

“They (school boards) would rather find an excuse, and that’s why you see all this alphabet soup,” she said, referring to the plethora of acronyms identity studies and social justice brings with it.

She noted – in terms of the school districts’ priorities – that when she was first elected, her kids’ school had rats in the cafeteria.

Justice said that when their members walk into a school board meeting with their “Moms for Liberty” shirts on, school staff and administrators know they mean business. She said they recognize their members are aware of student performance in their districts, literacy rates and how the budget is being spent.

And they know, she said, that teachers unions behave like the Kindergarten through Grade 12 “cartels.” Although Justice said she’s been called every name in the book from homophobe to racist, bigot, white supremacist and “domestic terrorist,” she said the things they are fighting for are not “partisan issues.”

“We are joyful warriors … we’re going to fight like hell with a smile on our faces,” she said. “Parents are very concerned about how their kids are doing in school… the idea that they can no longer trust the schools they send their children to is very unsettling.”

Although harmful gender ideology has spread across the US, Justice suggests it is far worse in Canada.

She said she has come to know the lengths activists are going in Canada  to spread gender ideology after connecting with Chris Elston – known on Twitter as @BillboardChris – a dad in British Columbia who has been avidly trying to expose the harms of gender indoctrination.

Justice called Elston a “national treasure” and called it  an “understatement” to say parental rights are under attack in Canada.

“I don’t know if (Canadian) parents have any rights to their children anymore,” she said. “And it doesn’t seem that any of your media is covering any of the harms of gender ideology and gender indoctrination.”

She said she was shocked to hear about the passing of  Bill C-4 (the federal bill to ban conversion therapy), the results of which could potentially hold parents accountable for not affirming a gender transition by their own kids.

She said it’s maddening to think that school officials and medical professionals would encourage a child in middle school to “lead a double life” and be forced to decide as young as age 11 whether they want to procreate as an adult.

“Truth is, this (pressure to transition as a child) can leave them with no ability to have a satisfying intimate sexual relationship,” Justice said.

“This is sterilizing children.”

“I think Americans are very naive as to how tyrannical the Canadian government has become,” she said.

Justice said she’s had plenty of Canadian moms reach out to her to set up chapters, but that for now all she can offer is advice. She said Canadian parents interested in taking on the school system should trust themselves and start meeting together to build relationships and pick each other up.

“I think Canadians are going to have to get together and start organizing,” she said. “If parents rise up against these things, the government will have no choice but to listen.”

“The government has been so oppressive, but I promise you nothing is going to change unless you try.”