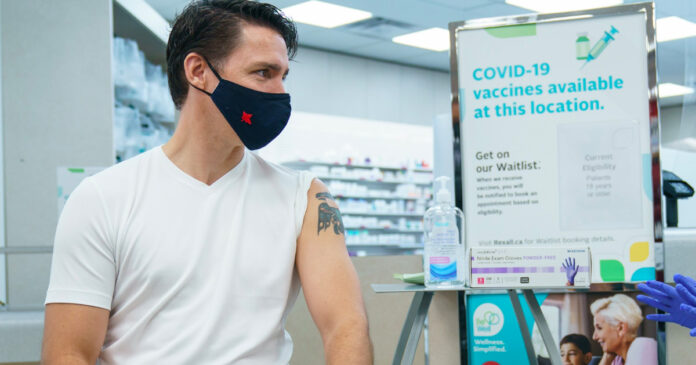 As legal action continues across Canada over the constitutionality of pandemic measures, three federal public sector unions have said they will now defend their members against the Trudeau government’s ongoing vaccine mandates.

Altogether, the three unions represent over 300,000 public servants. According to the Treasury Board, 1,828 of them had been forced onto leave without pay by the end of March.

The Trudeau government’s vaccine policy for federal employees – first announced Oct. 6 of last year – requires all public servants to have at least two Covid shots “whether they are teleworking, working remotely, or on-site.”

The policy was, however, up for its first slated six-month review on Apr. 6. The purpose of the review is for the government’s chief human resources officer to re-evaluate the vaccination policy, which is subject to modification based on changing circumstances.

Union officials said there has been no word of that review and that it is less reasonable than ever to suspend unvaccinated public servants who are working – or can work – from home.

“Not only have they failed not to give us a position, they failed to let us know when they’re going to come up with a position,” said PIPSC president Jennifer Carr. “We had a call (Tuesday), and they still can’t give us a tentative date.”

Like almost all unions across Canada, PIPSC, PSAC and CAPE say they endorse Covid vaccines and recognize that the vast majority of their members have gotten the required shots (the Treasury Board claims that around 99% of federal workers have).

They point out, however, that requiring a tiny minority of people who have not gotten the shots AND don’t need to go to an office to work shouldn’t be forced off the job.

“We continue to support vaccination. But given … the loosening of the COVID restrictions and the shifting landscape, we’re of the opinion that employer’s policy right now is unreasonable. These members can work from home.”

“My members are basically all office workers,” he said. “For the past two years, only a statistically insignificant number of people have actually had to go into the office.”

“What we’re saying is that if you have to go into the office, you should be vaccinated, as much as if you’re going into a construction zone, you have to wear steel toed shoes.”

As for the federal government’s response, Treasury Board spokesperson Alain Belle-Isle said that a review is currently underway, but also insisted “(t)here is no obligation to update the policy every 6 months.”

That wasn’t good enough for the three unions, whose grievances demand the federal labour relations tribunal require the government to allow suspended employees to work from home, as well as to compensate them for lost wages since Apr. 6.

“They have to look at other health and safety measures that are appropriate,” Carr added. “Again, working from home is one of those, as well as keeping people out of contact, but also ventilation rates and spacing and masking if applicable.”

This week, True North published a survey of recent arbitration decisions over vaccine mandates, as compiled by the labour law firm Mathews Dinsdale.

The survey concluded by recognizing that “circumstances surrounding the pandemic are constantly changing, and therefore the reasonableness of measures can also change,” but also that “it is clear the loosening of restrictions has not swayed arbitrators’ thinking that COVID-19 is still a large enough threat to the workplace to warrant mandatory vaccination policies.”

In B.C., a lawyer is now representing over 200 union members against the unions they say failed to defend them against the vaccine mandates that forced them off the job.