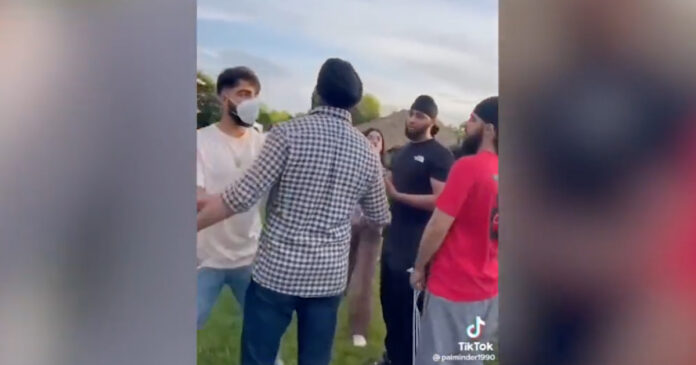 Beleaguered federal NDP leader Jagmeet Singh fled an Ontario election event in Brampton after being confronted by Sikh protesters over the weekend.

Videos of the incident show Singh leaving Brampton West NDP candidate Navjit Kaur’s campaign stop in a hurry as a crowd of demonstrators confront him. Protesters can be heard shouting “don’t sell out” as he was driven away in a black SUV.

“We’ve got questions,” said one protester. “Don’t sell out!”

According to Twitter user Jaskanwal Singh, the event organizers even called the police on a tiny handful of demonstrators wanting to ask questions at the public event.

Jaskanwal also blasted the NDP leader for supporting “punishing people” who decided not to be vaccinated against COVID-19.

This is the second time this month where protesters have confronted Singh over his support of Prime Minister Justin Trudeau.  Singh also encountered a group of demonstrators during a Peterborough campaign stop for local NDP candidate Jen Deck.

Although the incident was forwarded to police, Peterborough Police Service chief Tim Farquharson has said there are no grounds for criminal charges as a result of the incident.

“Investigators also spoke with the complainants in the matter and pending new information there are no grounds to proceed with criminal charges at this time,” wrote Farquharson. “While the behaviour, actions, and comments are disrespectful and should not be encouraged or condoned, they fail to rise to the threshold of being criminal in nature.”

In March, Singh reached a “confidence and supply agreement” with the Trudeau Liberals. The agreement would see the NDP prop up the minority Trudeau government until 2025 in exchange for policy promises like universal dental care and other priorities.

Singh also had the NDP vote in support of Trudeau’s continuation of the Emergencies Act on Feb. 21, days after the Freedom Convoy protests had been disbursed in Ottawa and a week after all border blockade protests had ended.

Trudeau then unilaterally revoked the act on Feb. 23 after hesitation in the Senate over passing the House of Commons’s ratification.