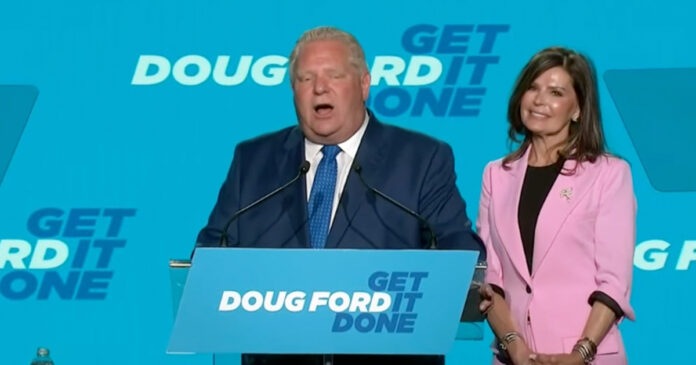 Ontario voters have given Premier Doug Ford’s Progressive Conservatives (PCs) a second term, with another majority government of 83 seats and 40% of the popular vote.

Ford’s historic victory saw the PCs picking up seats in non-traditional PC ridings, such as Windsor, Essex, Timmins and Brampton.

While it was a night to remember for Ford, the same can’t be said for the Ontario NDP and Liberals as both Andrea Horwath and Steven Del Duca stepped down from their leadership posts on Thursday evening.

During Horwath’s concession speech, the NDP leader told supporters that she has decided to step down from her leadership role.

“It’s time for me to pass the baton; to pass the torch,” said Horwath. “It makes me sad, but it makes me happy because our team is so strong right now.”

Del Duca announced during his concession speech that he will also be stepping down as leader.

“To be clear, this isn’t the outcome we had hoped for and worked hard for,” Mr. Del Duca told supporters.

“I am again so very proud of the work that we did.”

The NDP and Liberals are expected to hold leadership races in the coming months.

The Ontario election saw a record-low voter turnout of only 43%, with many observers noting the campaign lacked drama and serious competition for the PCs.

Ford’s victory comes after receiving a number of union endorsements during the election. These endorsements ultimately led to the PCs picking up seats in traditional NDP ridings in Windsor and Timmins.

During his victory speech, Ford said his proudest accomplishment as PC leader has been building a new coalition, expanding the base and building a more inclusive party, that even welcomes people who voted for Trudeau’s Liberals.

“Together we have done the impossible. We have made history. I am just so grateful,” said Ford to his supporters.

“Whether you work on the assembly line and voted NDP your entire life or cast your last ballot for the federal Liberals, I want you to know that as long as I am here, there’s room for you in this party.”

Ford’s victory may come as a surprise to some, as the premier became very unpopular during the Covid pandemic.

Ford was responsible for some of the longest lockdowns and school closures in North America. Ontarians were forced to stay at home, small businesses were forced to shutter their doors and gyms and personal care services were ordered to close.

According to Oxford University researchers, Ontario led Canada’s provinces and territories in the severity of its lockdowns and public health measures.

Ford’s key themes in the 2022 election were “Get It Done” and “Saying Yes.” For his second term, he said he plans on building 1.5 million new homes, increasing healthcare capacity and building the 413 highway in the GTA, among other pledges.