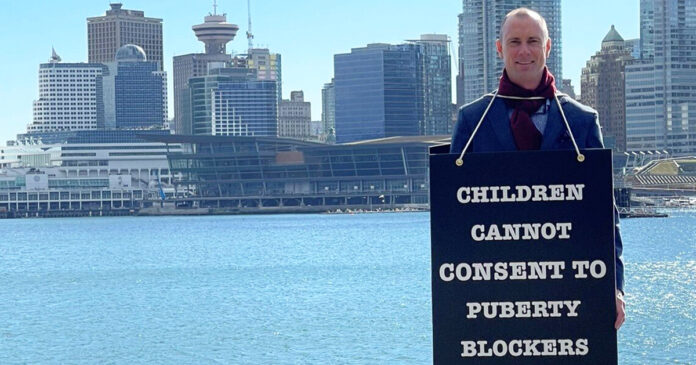 When I spoke with British Columbia’s Chris Elston a few days ago, he was just about to leave on his unofficial Pride Month tour.

First stops after an all-night drive from South Surrey would be San Francisco, Monterey Bay and San Jose where he said he’ll meet up with a woman who, like him, campaigns against the epidemic of gender ideology and the pressure put on young kids to transition medically.

This weekend he’ll be in Kelowna for their Pride parade and on June 25, he said he’ll meet up with some gay men attending Pride weekend in New York City.

The Surrey dad of two girls – known on Twitter as @BillboardChris – said he’ll go wherever it is busy with his favourite sign: “Children cannot consent to puberty blockers.”

He’s targeting Pride events because he says the annual celebration is not about gay rights anymore. Instead, Elston believes gay rights organizations are now fixated on trans rights.

Elston says, and I agree, that gay activists, having achieved their goals, had to find something else to keep the millions of dollars flowing.

“They’ve gone into schools and are indoctrinating kids,” he said. “It (gender ideology) has gone totally insane.”

Egale, once a respected organization advocating for gay and lesbian rights, is a perfect example.

Members of Egale now spend much of their time providing Trans 101 and other gender ideology workshops to kids as young as Grade 3. Recently some parents were shocked to learn that such a workshop was to be given to eight-year-old kids at Toronto’s Forest Hill elementary School, presumably led by their trans vice-principal.

Sources recently told me the Trans 101 workshop was restructured and given to Grade 5 students and up after parents protested the course – which in my view is still too young.

Elston is adamant that gender ideology does not belong in schools at all and he believes children are “never born in the wrong body.”

Elston earned his Twitter nickname in September of 2020 when he put up a giant billboard supporting author JK Rowling, who was bullied incessantly by the Twitter mob and called transphobic and a trans-exclusionary radical feminist (TERF) simply for challenging trans activism.

A Vancouver councillor, Sarah Kirby-Yung, had the billboard removed a day later, calling it “hate speech.”

The more Elston learned, the more he realized he couldn’t keep quiet. He was “compelled to do something,” he said, noting he now scrapes by on donations.

“I see it like a cult which has permeated throughout society,” he said. “It’s child abuse.”

Since he first started on his mission, he says he’s had some 6,000 conversations on the streets of the various U.S. and Canadian cities he visits.

He feels the activists and gender doctors are taking advantage of kids who are depressed, don’t fit in, suffer from autism or ADHD.

“They’re told they’re not going to find happiness unless they transition and could become suicidal if they don’t.

Elston has reviewed many studies, and concludes that when gender dysphoria starts at a young age, 86% of the kids grew out of it (without transitioning) and 64% grow up to be gay.

While those experiencing gender dysphoria were once mostly boys, the percentage of girls has just exploded in recent years, he adds.

“Kids are getting indoctrinated online and in some schools,” he says.

While he insists transitioning is not a left vs.right issue, it has now, sadly, become “cool, celebrated” to transition.

“This is a social contagion,” says Elston. “The whole thing has gone totally insane.”