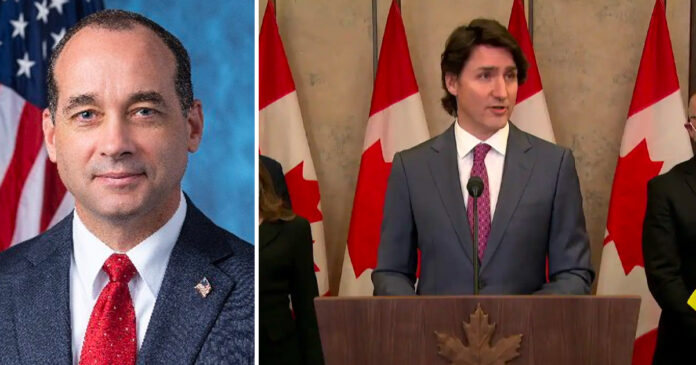 As Prime Minister Justin Trudeau met with President Joe Biden in Los Angeles for the Summit of the Americas, one US congressman had some choice words for Trudeau.

Good made the statement while the US House of Representatives debated the Federal Extreme Risk Protection Order Act of 2021 floated by the Democrats to limit who can purchase or possess firearms.

“Democrats simply do not believe in the inalienable rights of American citizens to life, liberty, and the pursuit of happiness. They believe that your rights come from government, and they, therefore, have the right to take them away,” said Good.

“The guarantee provided by our Founders to ensure we remain free from foreign invasion and, yes, as our Founders clearly warned us, from an oppressive government like we see in Canada, Australia, and the Democrats’ beloved Communist China is the constitutional right of law-abiding citizens to be armed as they choose.”

Good also slammed vaccine mandates and crackdowns on religious freedoms during the Covid-19 pandemic in his speech.

“Our most precious freedoms to assemble together, to go where you want, to worship as you choose, to earn a living or operate your business, to keep your job or your employees, what you have to wear on your face, and whether or not you are required to receive a vaccine that you may not want or may not need all trampled upon by Democrats in power,” said Good.

The US Congressman’s condemnation comes less than a month after Trudeau announced a handgun ban and other restrictions targetting legal firearm owners.

“(The) national freeze on handguns (would) prevent individuals from bringing newly acquired handguns into Canada and from buying, selling, and transferring handguns within the country,” a press release stated.

A chorus of international voices has spoken out against the Trudeau government in recent months pertaining to Canada’s extreme Covid restrictions and the use of the Emergencies Act to quash the peaceful Freedom Convoy.

Recently, Irish Senator Sharon Keogan called the government’s decision to freeze the assets of the Freedom Convoy in February an abuse of government power.