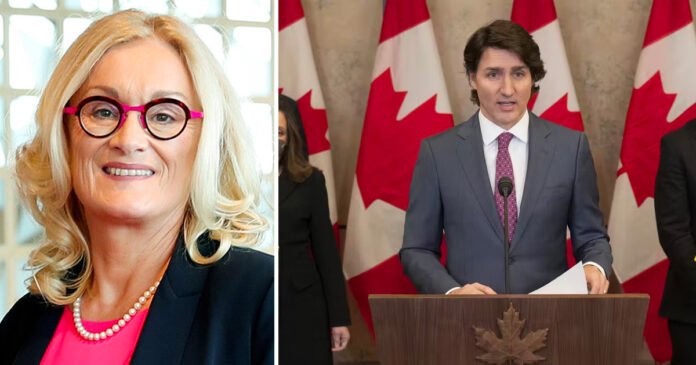 Independent Irish Senator Sharon Keogan pointed to Prime Minister Justin Trudeau’s use of the Emergencies Act to freeze the assets of Freedom Convoy protestors and their supporters as a stark abuse of government power.

During a May 10 debate about Covid-19 support programs, Keogan brought up the Canadian case as an example of the dangerous of excessive government control of people’s finances, specifically with regard to central bank digital currencies.

“Recent global events have given rise to concern over State control of private finances, however,” said Keogan. “The extrajudicial freezing of assets and transactions by the Canadian government of individuals deemed associated with anti-government protests provides a chilling case study in the abuse of centralized power.”

The senator went on to ask what steps the Ireland’s finance minister would take to protect the privacy of Irish citizens.

In February, Trudeau took the unprecedented step to invoke the Emergencies Act, empowering financial institutions to freeze the accounts of anything they suspected was involved with the convoy and stop “providing any financial or related services” to the protest.

At the direction of law enforcement, banks across Canada froze nearly $8 million held within 206 accounts.

Trudeau employed terrorist and money laundering financing laws to initiate the freezes, however, official testimony by the Financial Transactions and Reports Analysis Centre of Canada and the RCMP have indicated that there was no criminal or extremist groups funding the demonstrations.

Scotiabank’s CEO has since apologized to convoy organizer Benjamin Dichter for the effect freezing his accounts at the behest of the federal government had on him.

“Please accept our sincere apologies for the frustration and inconvenience this situation may have caused and thank you for your patience while we prepared our response,” wrote Scotiabank president and CEO Brian Porter in an email.

On May. 10 Keogan also blasted Canada for freezing the assets of Freedom Convoy protestors without a court order.

She called the action a "chilling case study" in the abuse of government powers. pic.twitter.com/8VGEpGnvPz

This was not the first time that Keogan has spoken out against Canada’s crackdown of the freedom convoy. On March 29, Keogan blasted Trudeau’s “so-called liberal democracy” for showing authoritarian leanings by banning unvaccinated Canadians from travel.

“These are our citizens who are locked up in another country and who cannot travel back to their own native homes. This requires immediate intervention by the Minister for Foreign Affairs, Deputy Coveney,” said Keogan.