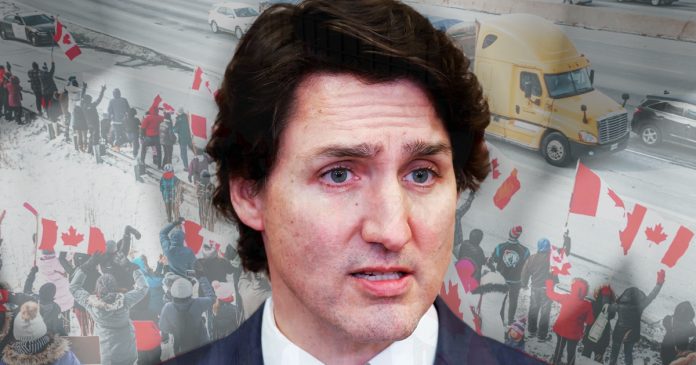 Throughout the protests, the Liberals and legacy media made a number of claims about the convoy ranging from extremist involvement, foreign funding and millionaires bankrolling the movement. To date, all of these claims have been called into question by law enforcement officials and fundraising executives.

Several Trudeau cabinet ministers claimed in February that foreign extremists were funding the convoy to undermine Canada’s democracy. Among these ministers was public safety minister Marco Mendicino who stated – without evidence – that many of the donations had “been raised from abroad.” Minister of emergency preparedness Bill Blair also claimed that “foreign entities” were behind the protests.

Media outlets including the Toronto Star and the CBC also published articles falsely suggesting that the convoy was foreign-funded. The CBC was forced to retract a story that claimed that support for the convoy had come mainly from abroad.

True North has listed nine instances where officials have categorically disputed the Liberal government’s claims about the Freedom Convoy.

During a Commons finance committee on Mar. 17, GoFundMe president Juan Benitex dismissed claims that foreign millionaires had bankrolled the Freedom Convoy. According to Benitez, his platform “did not discover” any large donors that would have raised red flags suggesting foreign influence.

“Were there any large donors that would have stuck out, that would have raised red flags in terms of perhaps trying to influence the outcome of this protest?” Conservative MP Ed Fast asked during the testimony.

“We did not discover that, no,” said Benitez. “As we reviewed the donations we did not identify significant donations or patterns that were there.”

GoFundMe’s general counsel, Kim Wilford, also confirmed that the largest donation was $30,000 and came from Canada.

Despite the Liberal government treating convoy donations as terrorist financing and money laundering, a chief RCMP official stated that the federal policing force saw no evidence of terrorist involvement in the convoy’s funding.

“FINTRAC was before our committee,” said Conservative MP Philip Lawrence to Beaudoin. “They had some interesting testimony on the flow of the money into the crowdfunding and into the protests – that they did not see any evidence of terrorist activity. Did you see any evidence of terrorist activity in the funding of these illegal protests and blockades?”

“I have not,” said Beaudoin.

Convoy was funded by Canadians, not foreigners

According to executives with the crowdfunding platforms GoFundMe and GiveSendGo, the vast majority of funds donated to the Freedom Convoy were from Canadians and not foreign sources.

“Our records show 88% of donated funds originated in Canada and 86% of donors were from Canada,” GoFundMe president Juan Benitez told the Commons public safety committee on Mar. 3.

GiveSendGo executives also said that 63% of the funds donated to their platform were from Canada.

“Most of the donations were under a hundred dollars,” said GiveSendGo co-founder Jacob Wells during the same meeting. “It’s pretty consistent across the board.”

According to MacKillop, the funds came from the pockets of Canadians who were fed up with COVID-19 measures.

“It was their own money. It wasn’t cash that funded terrorism or was in any way money laundering,” MacKillop told the Commons finance committee on Feb. 24.

In another testimony before the Commons public safety committee on Feb. 10, MacKillop told MPs that there were no signs that what was happening in Ottawa was a form of ideologically motivated violent extremism.

No firearms discovered during crackdown

On Mar. 24 Ottawa Police’s interim chief Steve Bell told parliamentarians before the Commons public safety committee that no loaded firearms were discovered when police moved in to arrest the truckers and their supporters.

“No, not relating to any charges at this point,” said Bell.

Prior to Bell’s admission, several media outlets spread the story that loaded firearms were found at the protest. Most recently, freelance reporter Justin Ling published an article in the Toronto Star alleging the same.

Arson attempt not linked to convoy

The Ottawa Police Service officially disputed claims by MPs and the media that the Feb. 6 attempted arson at a residential building was connected to the Freedom Convoy protests.

Numerous Liberal and NDP politicians including NDP leader Jagmeet Singh spread the false claim that convoy participants were involved in attempting to burn down the building with residents still inside.

“(Protesters) have harassed employees of local businesses, so much so that businesses have had to close for three weeks. There was an attempted arson and the doors were handcuffed shut so that if a fire started, people would be burned alive inside the building,” said Liberal MP Jennifer O’Connell on Feb. 19.

According to statements by Ottawa police, neither of the suspects were involved in any way to the protests.

Contrary to claims made by Liberal Public Safety Minister Marco Mendicino, police didn’t request for the federal government to invoke the Emergencies Act to deal with Freedom Convoy protestors.

RCMP Commissioner Brenda Lucki told Senator Vernon White that there was “never a question” to resort to emergency powers.

“No, there was never a question of requesting the Emergencies Act,” said Lucki.

Mendicino claimed on several occasions that such a request was made by police and the Liberal government cited it while trying to justify Trudeau’s unprecedented invocation.

“It was only after we got advice from law enforcement that we invoked the Emergencies Act,” said Mendicino.

Mendicino’s claim was further discredited by Interim Ottawa Police Chief Steve Bell in May who also said that the city’s police force did not request the government use the act.

Woman who danced on war monument not affiliated with convoy

The woman who was caught dancing on the Tomb of the Unknown Soldier while Freedom Convoy protests were taking place admitted that she was not in any way associated with the convoy truckers.

Prime Minister Justin Trudeau called the incident “desecration” on Jan. 31 and linked it to the Freedom Convoy.

“I know you’re wondering about what you saw in our capital this weekend,” Trudeau read from a prepared statement. “Freedom of expression, assembly and association are cornerstones of democracy, but Nazi symbolism, racist imagery, and desecration of war memorials are not.”