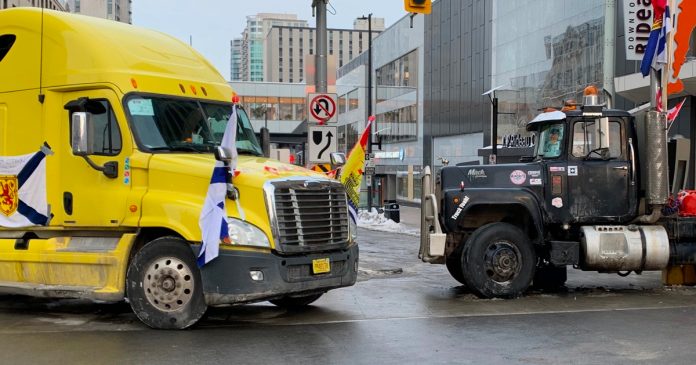 Canada’s chief financial intelligence agency has once again shut down claims by the Trudeau government that donations given to the truckers’ Freedom Convoy constituted terrorist funding.

Blacklock’s Reporter reported Friday that Financial Transactions and Reports Analysis Centre of Canada (FINTRAC) deputy director of intelligence Barry MacKillop had declared the money raised for the convoy protests came from people supporting a cause they believed in.

“It was their own money. It wasn’t cash that funded terrorism or was in any way money laundering,” MacKillop told the Commons finance committee.

The Liberal government and legacy media have repeatedly claimed that the protests sweeping Canada for the past month have somehow been supported by funding from foreign extremists.

This is not the first time that FINTRAC has poked a hole in the Liberal government’s narrative regarding the convoy’s funding.

MacKillop told parliamentarians on Feb. 10 that there were no signs that the Ottawa protests were a form of ideologically motivated violent extremism and that no transactions related to the demonstration had been flagged by his department.

Prime Minister Justin Trudeau invoked the Emergencies Act on Feb. 14 to crush demonstrations in Ottawa. The law also expanded the scope of terrorist and money laundering laws to include crowdfunding platforms.

“This will help mitigate the risk these platforms receive illicit funds,” Freeland said to justify the decision.

“We are making these changes because we know these platforms are being used to support illegal blockades and illegal activity which is damaging the Canadian economy.”

According to Department of Finance officials, as little as $20 in donations was enough to trigger a bank account freeze and an investigation under the act.