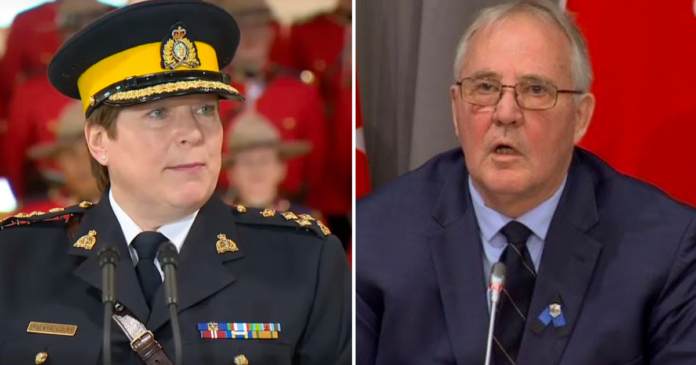 Conservative interim leader Candice Bergen told reporters that she was disgusted by the news that the Liberal government allegedly pressured Commissioner of the RCMP Brenda Lucki to use the 2020 Nova Scotia mass shooting for political gain.

Bergen’s remarks come less than 24 hours after the Halifax Examiner broke the bombshell report based on notes by Lucki’s subordinates managing the response to the shooting.

“The Conservatives believe Supt. Darren Campbell when he says that Brenda Lucki the Commissioner pressured the RCMP and the reason she did it was because she had made a commitment or she had been pressured by the Prime Minister’s Office and or the public safety minister’s office,” said Bergen.

“This is disgusting to know that the Prime Minister in his office would use the death of Canadians for his own political gain but unfortunately we have seen it before.

In Supt. Campbell’s notes, it was alleged that Lucki demanded the firearms used in the massacre to be revealed to the public, despite officers arguing that releasing such information during the early stages of the police response could compromise the investigation.

“The Commissioner was obviously upset. She did not raise her voice but her choice of words was indicative of her overall dissatisfaction with our work. The Commissioner accused us (me) of disrespecting her by not following her instructions. I was and remain confused over this,” wrote Campbell.

“The Commissioner said she had promised the Minister of Public Safety and the Prime Minister’s Office that the RCMP (we) would release this information.”

On Wednesday, Bergen pledged to hold the Trudeau government to account over the allegations citing the prime minister’s past habit of interfering in independent institutions like the justice system during the SNC-Lavalin affair.

“(They) need to be held accountable. We will make sure that happens right now. This is a pattern with this Prime Minister. You will recall with SNC Lavalin that the Globe broke the story and the Prime Minister looked in the camera and said I did not pressure the attorney general Jody Wilson-Raybold,” said Bergen.

“We know now that was not true, so when the minister of public safety looks in the camera and says I did not pressure the commissioner it’s very difficult to believe that.”

Blair and other high-ranking government officials have denied the political interference allegations.

“I’m telling you, and I would tell the superintendent, if I spoke to him, that I made no effort to pressure the RCMP to interfere in any way with their investigation,” said Blair.

“I gave no direction as to what information they should communicate. Those are operational decisions of the RCMP, and I respect that and I have respected that.”