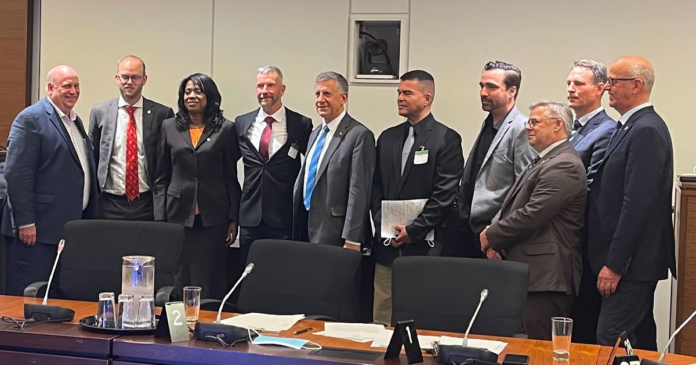 Canadian Armed Forces (CAF) veteran James Topp took a break from his march across Canada Wednesday to meet with Members of Parliament in Ottawa.

Topp began marching from Vancouver to Ottawa in February to protest the government’s vaccine mandates and restrictions.

He is set to return to Deep River, ON so he can continue his 4000 KM march. Topp is scheduled to formally arrive at the National War Memorial on Jun. 30 at 6pm.

In his opening statement, Topp said that he has heard from a lot of people who are dissatisfied with the current Trudeau government.

He also addressed growing divisions in Canada, which he says resembles what he has seen in war zones.

“There is a divide in this country I have never seen or experienced before – I’ve only ever seen it in a warzone.”

In addition to Topp’s arrival at the war memorial next week, freedom rallies have also been planned for Canada Day and on weekends throughout the summer.

Topp explained that the planned freedom events on June 30th are not a protest, but rather a celebration of his arrival.

“This is not a protest, I am not occupying the city, I am arriving at the war memorial where I am going to put my hand on the Tomb of the Unknown Soldier.”

Topp added that he is hoping to work with law enforcement to ensure that the planned events go smoothly.

Marazzo also spoke to the MPs, and said that the current state of Canada is a mess. He hopes to partner with the Canadian government to address the issues.

“James has been to a civil war. I’m not saying that’s what’s going to happen here, but there’s a lot of similarities that are, you know, pre-civil wars around the globe if you look at your history,” added Marazzo.

During the meeting, Saskatchewan MP Jeremy Patzer said that the Conservatives supported Topp’s cause.

“You do have allies. You’ve had allies all along, and so I just wanted to encourage you guys going forward.”

In recent months, the Conservatives have been highly critical of the government’s pandemic response and have been pushing the Trudeau government to end its vaccine mandates.