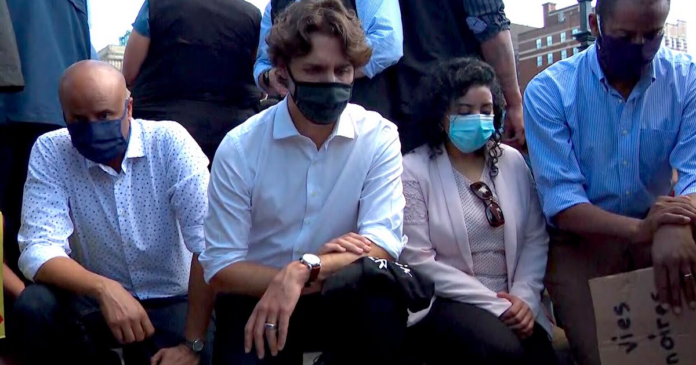 Prime Minister Justin Trudeau has a long track record of deliberately politicizing tragedies throughout his time in office.

Trudeau has indiscriminately used mass shootings, wars, and refugee crises for political gain. Often, he has opportunistically pushed policies in the immediate aftermath of these events.

According to a note by Supt. Darren Campbell, Lucki “promised the Minister of Public Safety and the Prime Minister’s Office” to reveal details about the firearms used by the shooter while the investigation was ongoing to further the Liberals’ gun control agenda.

The Trudeau government’s cynical political opportunism extends not only to Canadian tragedies but to matters in the US and beyond. True North has compiled a list of seven times the Trudeau Liberals have politicized a tragedy.

The prime minister seems to jump at every opportunity to push forward his gun control agenda. Following the horrific school shooting in Uvalde, Texas, Trudeau immediately responded by introducing a ban on handguns for law-abiding firearm owners in Canada.

Trudeau cited the shooting as a reason behind the government’s decision to push through the ban.

“It will no longer be possible to buy, sell, transfer or import handguns anywhere in Canada. In other words, we’re capping the market for handguns,” said Trudeau.

“We need only look south of the border to know that if we do not take action, firmly and rapidly, it gets worse and worse and more difficult to counter.”

At the height of the Russian invasion of Ukraine, Prime Minister Justin Trudeau visited Ukraine to reopen the Canadian Embassy.

While there the prime minister and his cabinet did an extensive tour and photo op while also making several announcements of support for President Volodomyr Zelenskyy and the Ukrainian military.

“I think it’s a testament to how the Ukrainian people have been so strong and resilient,” Trudeau said.

“And having our Canadian flag fly over the streets of Kyiv once again is just another testament to the strength and solidarity of Canadians and Ukrainians, and how we continue to be with them.”

After a London, Ontario man rammed his truck into a Muslim family killing four and wounding one Trudeau jumped to use the incident as an opportunity to blast federal agencies for not doing enough to end Islamophobia.

“From the (Canada Revenue Agency) to security agencies, institutions should support people, not target them,” said Trudeau.

As violent Black Lives Matter protests rocked much of the US in 2020, Trudeau used the police killing of George Floyd to encourage and attend a mass rally in Ottawa.

While at the rally which violated Covid-19 restrictions at the time, Trudeau knelt among protestors while photographers captured the moment nearby.

During comments given before the event, Trudeau accused Canada of being systematically racist.

“Canadians right across the country are joining together and standing up to speak out clearly about the systemic discrimination that has existed for far too long in our country,” he said.

“We have thousands of people stepping forward to highlight the challenges and to show that they want to be allies. I salute the work they’re doing.”

May 2020: Capitalized on the mass shooting in Portapique to ban guns

The government utilized the tragic event in Portapique, NS as rationale to announce a sweeping ban on 1,500 models of what the Liberals claimed were “military-grade” and “assault-style” firearms in Canada. The ban prohibited law-abiding gun owners from selling, transporting, importing or even using these guns.

The ban was made effective immediately and approved by an order-in-council from cabinet, avoiding debate and scrutiny in parliament.

At the onset of the Covid-19 pandemic, Trudeau used the Lunar New Year to imply that Canadians were discriminating against people of Asian descent.

“There is no place in our country for discrimination driven by fear or misinformation,” said Trudeau.

“This is not something Canadians will ever stand for.”

In an attempt to virtue signal against former US president Donald Trump, prime minister Justin Trudeau opened Canada to an influx of illegal border crossers.

“To those fleeing persecution, terror & war, Canadians will welcome you, regardless of your faith. Diversity is our strength #WelcomeToCanada,” tweeted Trudeau on Jan. 28, 2017.

Soon after the government was flooded with a wave of confusion and refugee or asylum applications.

“I am seeking official guidance/response from Ottawa on how to address refugee enquiries following all the publicity around the US ban on some nationalities, and our Prime Minister’s tweet on welcoming refugees,” wrote an email by federal staff.