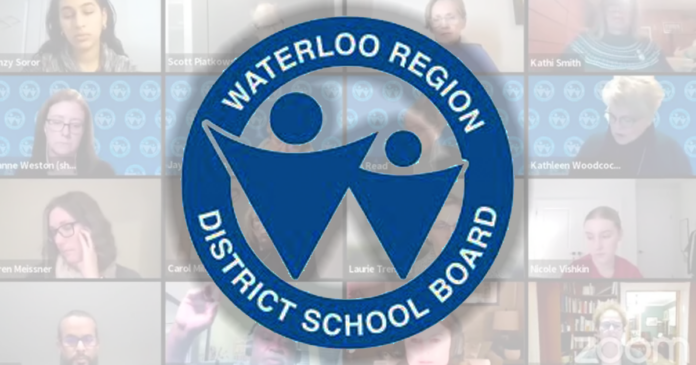 All Waterloo Region District School Board (WRDSB) trustees Mike Ramsay and Cindy Watson wanted was some transparency around the use of Critical Race Theory (CRT) and “white privilege” in the board’s classrooms.

But when their motion – asking how CRT and “white privilege” fits into the board’s “anti-racism” curriculum – came to the board’s committee of the whole this past week, Ramsay had already been banned from the meeting over a secret code of conduct complaint.

The report on that complaint, launched by trustee Laurie Tremble, was discussed in camera on June 6. In a public session, gleeful NDP-leaning trustees – led by board chairman Scott Piatkowski – voted 6-3 to apply the maximum number of sanctions available to them to punish Ramsay.

That has effectively neutered the board’s only black trustee and outspoken critic of woke policy until this October’s election.

CRT – which has its roots in Marxist ideology – posits that “anti-black racism” is deeply embedded in western institutions. It claims these institutions maintain white dominance and create an uneven playing field for black people. The theory teaches that white people are the oppressors and blacks are the oppressed.

The motion didn’t have a fighting chance. It was voted down 9-1 with Watson, the mover, the only one in favour.

The vote came immediately after a number of woke activists took the stage to defend CRT in schools and accuse Canada of being a racist country.

Jeewan Chanicka, the same person who claimed men can menstruate in a laughable eight-minute video last month, contended the impact of the motion was nothing short of horrendous.

Replying to questions from the woke trustees, Chanicka said he’s a director in whose body “multiple intersecting identities run through” and that many students and families have expressed fear about the motion.

“It has Impacted children to such extent that many are becoming suicidal or want to leave the region,” he said, wiping his tear-stained eyes for dramatic effect.

“Some of these conversations have generated so much hate, so much racism that we’ve had to talk to police several times especially in the past two week.”

Even people have expressed concern with his own safety, he added.

He denied CRT is being taught with the exception of two high school courses.

He didn’t mention a word about white privilege, although he did insist that Canada is a country “steeped in racism” and that residential schools have been blueprint for “genocide.”

But the whack-a-doodle activists who came before him – all to talk about CRT – seemed to suggest otherwise, even if the term CRT isn’t actually used.

Aashay Dalvi who identifies as “he/she/they” and a “genderqueer” – and who has protected his tweets since speaking before the board – claimed that CRT exists to “critique racism” and allows children to “acknowledge oppression” while challenging the “settler colonialist ideologies” of white people.

Speaking from what appeared to be his bed – contending he was on Indigenous lands – he said he encourages teachers to teach from books of CRT founders and encourages parents to “decolonize” their kids’ bookshelf.

“Parents need to educate kids so they don’t  grow up turning a gun on someone non-white,” he said before signing off from his bed.

Amanda Bripaul, who said she googled whether Kitchener-Waterloo was racist before she moved to the city last year, denied schools are trying to teach CRT. Rather students are being taught equity, she said.

“(The use of CRT) is a U.S. racist dog whistle,” she said. “People get scared when they have to share privilege and power.”

She added that we should feel “discomfort” at how so many systems are built so that one particular colour gets privilege and power (not having the faintest clue that this is straight out of the CRT manifesto.)

Behaviour analyst Natalie Robinson claimed the goal of the CRT motion was to “whitewash history to support white privilege.”

TK Pritchard, a white man who uses the pronouns “they/he” and describes himself as “queer, trans and non-binary,” said the motion “consistently prioritizes white voices.”

“These kinds of motions are thinly veiled right wing extremist tactics,” he said.

He added that the motions could impact on the safety of “racialized” teachers.

Pritchard didn’t explain how it would happen, just like Chanicka didn’t say who exactly was suicidal.

It was all just hyperbole and rhetoric from activists and educators who use shame and guilt to try to extinguish dissenting voices.

The deranged left has taken over the WRDSB but fortunately, people are slowly but surely awakening to these destructive woke tactics.