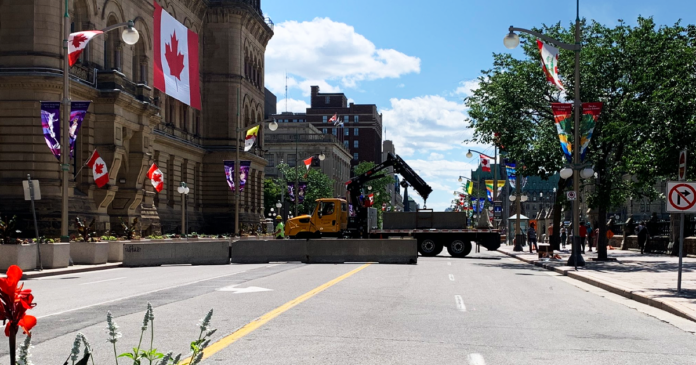 Not since 9/11, if even then, have I seen Wellington Street and the area around Parliament Hill as desolate as I did a few days before Canada Day. The Trudeau government has moved the main Canada Day festivities to LeBreton Flats, a couple of kilometres down the hill near the National War Museum. The official reason for the venue change is “construction”. That’s more than a little strange, when the Flats is basically one big construction zone, including a fenced-off open pit, just the other side of Wellington.

You can decide how credible you think the government’s explanation for the change of venue is.

Someone of a cynical bent might think that Trudeau and company have been spooked by the peaceful protestors of the Freedom Convoy, who exercised their constitutional right to protest on and near Wellington this past winter. What does it say about the state of our polity and society when the government isn’t even willing to celebrate Canada Day at Parliament, which is supposed to be the house of the people, or at least of our elected representatives? Indeed, signage at the construction site on Parliament Hill reads: “A Place Where Canada Comes Together. The seat of Canada’s democracy is also its symbolic heart. Parliament Hill is where the Canadian public gather to celebrate, grieve and protest, and to share important experiences and join in events.”

The stage for Canada Day celebrations being set up at Le Breton flats. Normally the stage would be at Parliament Hill, but this year ostensibly moved to Le Breton due to construction on Parliament Hill. Meanwhile this is the construction around the flats. Literally an open pit. pic.twitter.com/cGbZzPOaqU

Apparently though, not Canada Day 2022. In fact, this was more a place of the people when the Freedom Convoy and its supporters turned Ottawa into a winter version of Canada Day – a real carnival of friendship and camaraderie, bringing together Canadians of all ethnicities, cultures and regions.

Fittingly, the signage is directly across the street from the Prime Minister’s Office, from which Trudeau rules the country. What then does it tell us about the state of Canada? The Freedom Convoy protests and the Trudeau government’s brutal suppression of them have opened up fissures in what appeared to many to be a placid middle ground of a country where everyone mostly agreed on everything. That might have been the Canada of previous decades, but it’s certainly not the country that has seen the first genuine popular protest against an overreaching and all-powerful technocratic and managerial state, that we’re currently witnessing.

After more than two years of virtual rule by diktat, by a minority government shored up by an even more leftist party which on its own could never form a government, many grassroots Canadians are saying, enough is enough, and we need to reclaim our individual liberties and personal freedoms. That’s certainly the lens through which I see the Freedom Convoy, despite the best efforts of Trudeau and his willing allies in sections of the legacy media who wanted to portray peaceful protestors as some kind of latter-day insurrectionists.

Meanwhile, the celebration, such as it is, will take place with the public penned into an open ground on the plains below Parliament, far away from the hilltop from which the politicians and bureaucrats govern the country. The divide between the rulers and the ruled couldn’t be more stark in terms of the geographical imagery. Should Canadians who would have celebrated Canada Day on Parliament Hill vote with their feet, and choose to stay away from the playground that Trudeau has created to keep us all occupied while grand affairs of state transpire elsewhere?

As I was walking along Wellington Street, three days before Canada Day, I struck up a conversation with Odilia, who came to Canada in 1985 with her brother, fleeing persecution in Guatemala. When she and her husband drove in to the city a few days before Canada Day, her husband removed the flags they normally fly from the car because he was afraid that they might be targeted by the police as possible trouble makers. Recall that the flags were a potent symbol of the Freedom Convoy, with many in the liberal commentariat claiming that they had “hijacked” the flag. I asked Odilia what she thought of all the fencing around Parliament Hill, and she said it reminded her of Guatemala, a place she left behind fleeing persecution, and she thought she’d never see anything like this in Canada.

That poignant remark summarizes best the state of Canada as we prepare to celebrate Canada Day 2022.