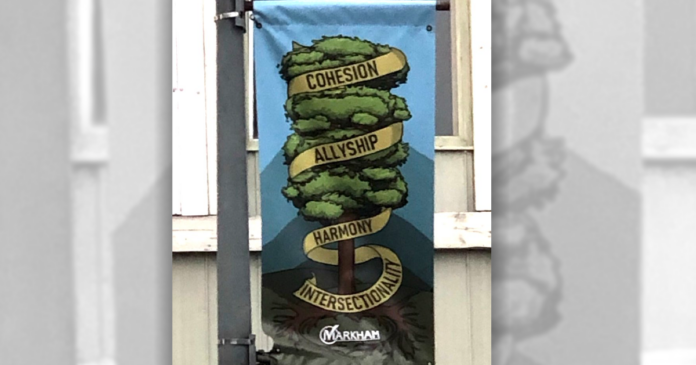 A photo of the banner was shared on social media by Quilette editor and commentator Jonathan Kay, asking users to give their opinion about the messaging.

The banner features a flurry of buzzwords wrapped around a tree: “Cohesion, allyship, harmony, intersectionality. “

“Intersectionality” refers to a concept that emerged out of radical feminist critical theory which argues that people are discriminated against based on different aspects of a person’s identity.

“Intersectionality is the acknowledgement that everyone has their own unique experiences of discrimination and oppression and we must consider everything and anything that can marginalise people – gender, race, class, sexual orientation, physical ability, etc,” writes the organization Womankind Worldwide.

“In Markham, we acknowledge that all forms of racism and discrimination exist, and this particular acknowledgement also supports the acknowledgement of the historical and ongoing disparities faced by Markham’s Black population,” read the report.

“We chose the symbolism of a tree to represent this process, because much like a tree, our success in creating equitable outcomes for our community require the right conditions for growth: the ability to adapt to an ever changing climate, strong roots and constant growth.”

“The name of Vaughan being attached to a school perpetuates these harmful effects against Black students, families and the community,” wrote the motion.