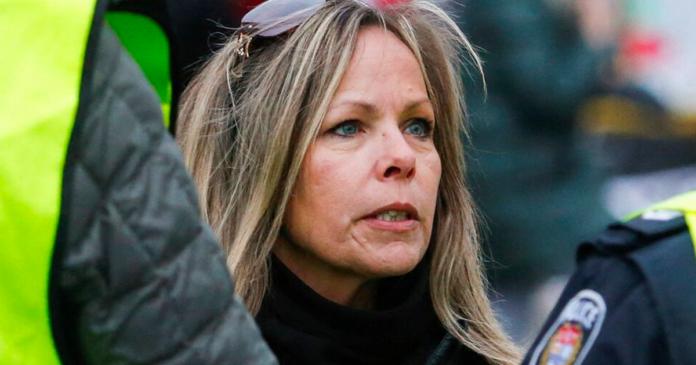 Freedom Convoy organizer Tamara Lich will remain in jail until at least Friday afternoon as the Justice of the Peace overseeing her bail hearing makes his decision.

At a day-long hearing Tuesday, Crown prosecutors argued that Lich breached her conditions after being photographed alongside fellow organizer Tom Marazzo at a Justice Centre for Constitutional Freedoms George Jonas Award ceremony in June.

Lich’s bail conditions prohibit communication with a number of people, including Marazzo, unless in the presence of counsel.

Lich’s lawyers argued that counsel was present at the event.

Karimjee and other Crown prosecutors are seeking to have Lich’s bail revoked and to have her detained for her mischief, obstructing police, counselling others to commit mischief and intimidation charges related to the Convoy protests.

According to Ottawa Police Service Det. Chris Benson, he believed appearing in the photograph was a violation of that condition due to the closeness between Marazzo and Lich.

The lawyer representing Lich, Lawrence Greenspon is disputing the Crown’s claims and is arguing that she should be released once again with conditions.

Crown lawyers attempted to have Lich returned to jail in May prior to the awards ceremony.

At the time a judge found that accepting the award was not enough to constitute a violation of the bail conditions placed on her.

Judge Kevin Phillips decided that her prior release “remain(ed) appropriate” and that she had already received “a taste of jail” from her prior imprisonment.