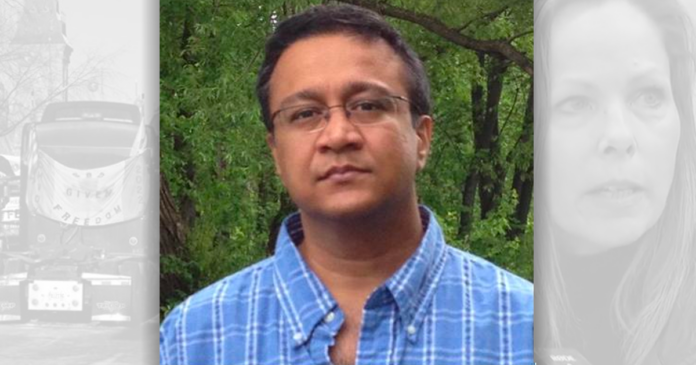 Official Elections Canada political financing records reveal that Moiz Karimjee from Ottawa donated over $17,000 to the Liberal Party of Canada since 2013.

Karimjee is currently the lead Crown prosecutor in charge of the case against Freedom Convoy organizer Tamara Lich.

Contribution data from Elections Canada reveals that Karimjee from Orleans – a suburb of the nation’s capital – donated a total of $17,176.24 to various Liberal Party of Canada efforts. The latest contribution listed by Karimjee was on Sept. 30, 2019 amounting to $250.

On May 21, 2017, Karimjee also made a large contribution worth $1,500 to the Liberal Party of Canada. His extensive support continued regularly for nearly six years spanning 29 different contributions.

Karimjee did in fact also donate to the Conservative Party of Canada on two occasions in 2010 amounting to $800.

A Dec. 12, 2017 open fundraising event report by the Liberal Party of Canada also lists Karimjee as an attendee. The event took place at the National Gallery of Canada and had Prime Minister Justin Trudeau as a featured guest.

The event was branded as a “donor appreciation” celebration for those who gave at least $1,500 annually to the Liberals. Among those in attendance also were SNC Lavalin lobbyist Bruce Hartley, Trudeau’s former principal secretary Gerald Butts and the prime minister’s chief of staff Katie Telford.

“Justin Trudeau, Leader of the Liberal Party of Canada, will deliver remarks at a Laurier Club donor appreciation reception in Ottawa on December 12, 2017,” a press release from the time stated.

“The Liberal Party of Canada has committed to the strongest standards in federal politics for openness and transparency, and is challenging other parties to do the same.”

True North has reached out to Karimjee via email for clarification but did not receive a response in time for publication.

On Tuesday, Karimjee appeared before an Ottawa court to argue that Lich had breached her bail conditions and deserves to be seen behind bars again after being photographed with fellow organizer Tom Marazzo at a Justice Centre for Constitutional Freedom’s award gala.

As a result of the hearing, the overseeing Justice of the Peace ordered that Lich will remain in jail until Friday afternoon while he makes a decision on her bail hearing.

In a prior heated bail hearing that saw Lich released, Karimjee demanded that the overseeing judge stepped down from the trial.

OP-ED: As Europe increases sanctions on Iran, Canada must not be last to act