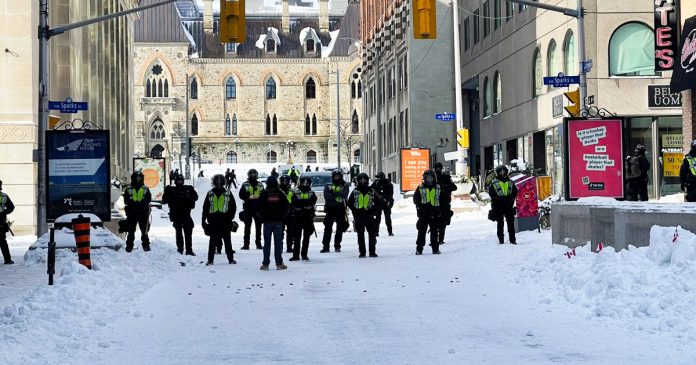 The Conservatives are demanding that the federal privacy watchdog investigate the Liberal government’s decision to freeze the bank accounts of Freedom Convoy protestors.

According to Blacklock’s Reporter, Conservative MP Adam Chambers wrote a letter to Privacy Commissioner Philipe Dufresne after a damning testimony by bank officials which indicated that the order might have violated the Privacy Act.

“Institutions received no instruction on how to properly store, keep or use the data received from the RCMP,” explained Chambers.

“There were no limits placed or instructions provided regarding how receiving institutions may use or rely on data received even after the Act’s use had expired.”

Chambers went on to say that the Feb. 14 invocation of the Emergencies Act was essentially limitless with regard to what information could be obtained about Canadians.

“There appear to have been no instruction or restriction on whom or how many individuals within a receiving institution may have access to the data,” wrote Chambers.

“What was the information shared with receiving institutions: name, address, date of birth, Social Insurance Number, other identifying information, information about alleged offences? How many individuals had private personal details and alleged activities shared?”

In response to the Freedom Convoy, Prime Minister Justin Trudeau used the never-before-used Act to authorize law enforcement to request that banks freeze the assets of participants without a court order.

At the time, the Liberals claimed that the movement was foreign funded and Finance Minister Chrystia Freeland cited anti-terrorism and money laundering financing laws to justify quashing protestors.

“We are broadening the scope of Canada’s anti-money laundering and terrorist financing rules so that they cover crowdfunding platforms and the payment service providers they use. These changes cover all forms of transactions, including digital assets such as cryptocurrencies,” said Freeland when announcing the Emergencies Act.

Later testimony by the Financial Transactions and Reports Analysis Centre of Canada (FINTRAC) and others poked holes in the government’s narrative after it was revealed that a majority of the donations came from Canadians and had nothing to do with illegal activities.

“It was their own money. It wasn’t cash that funded terrorism or was in any way money laundering,” said FINTRAC’s deputy director of intelligence Barry MacKillop in February.