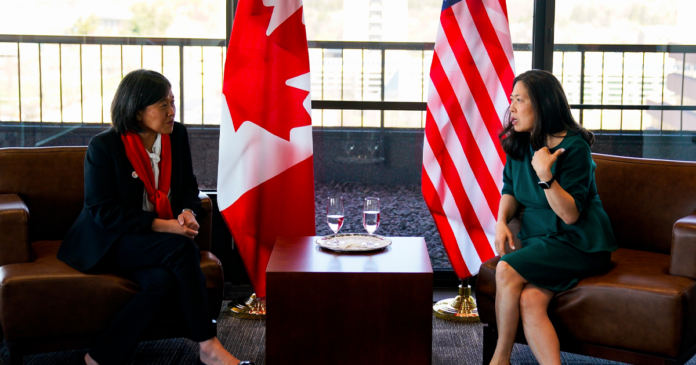 A top US diplomat raised concerns about the Liberal government’s censorship law Bill C-11 in a recent meeting with Minister of International Trade Mary Ng.

According to University of Ottawa internet and e-commerce law professor Michael Geist, Bill C-11 could trigger retaliatory tariffs from the US since digital products are included in the Canada-United States-Mexico Agreement (CUSMA).

Meanwhile, Canada’s readout of the meeting makes no mention of Tai bringing up Bill C-11 with Ng.

“The creation of a new trade irritant with Bill C-11 could prove extremely costly as it opens the door the possibility of hundreds of millions of dollars in retaliatory tariffs. Those tariffs can target any sector, meaning they could be levied on dairy, steel or other sensitive economic sectors,” explains Geist.

“From a Canadian perspective, the CUSMA cultural exemption allows for discriminatory policies but at a price with Bill C-11 opening the door to U.S. retaliatory measures that would be designed to match any new benefits dollar-for-dollar. With the U.S. now signalling its concern with the legislation, the risks of pushing ahead with the unprecedented regulation of user content just got much bigger.”

As reported by True North, the news that Bill C-11 passed through the House of Commons has prompted numerous YouTubers to consider leaving Canada.

“My life and the life of other Canadian YouTubers just got turned upside down. Our government just passed Bill C-11 which gives them control over what Canadian citizens see on the internet,” said YouTuber Rick Kackis.

“Where do we go from here? No one knows, it’s simply terrifying. People in the states. Got any good deals on housing? Because apparently, I’ve got to move.”