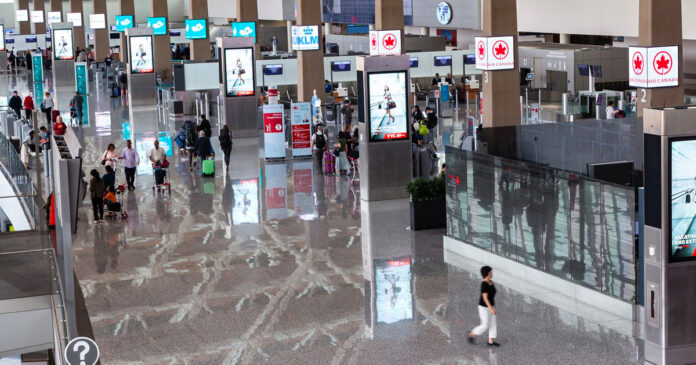 Seventy percent of Canadians believe the current situation at the country’s airports is a national embarrassment, according to a new poll.

Canadian airports continue to be plagued with delays amid staffing shortages and remaining federal Covid mandates and restrictions.

An Ipsos poll conducted for Global News saw that 58% of Canadians are currently avoiding airports, with that number being even higher (64%) among those over the age of 55.

Meanwhile, 23% of respondents said they recently experienced a delay while flying out of a Canadian airport.

In addition, 70% percent of Canadians surveyed say the ongoing situation at airports has become a national embarrassment.

While other airports around the world, including London Heathrow, have also been dealing with problems, 57% of Canadians do not think Canada is doing better than other countries when it comes to addressing its airport issues.

Only 37% of respondents said the Trudeau government has done enough to address the ongoing flight delays and cancellations, while 35% said the airlines are doing enough.

As for who is responsible for the current airport delays, 39% of Canadians blame the Trudeau government, airports, airlines and travellers.

Meanwhile, 22% of respondents placed the blame solely on the federal government, 18% placed it on airlines and 13% solely blamed airports. Eight percent said the responsibility is on “out of practice” Canadian travellers.

As for the expected duration of the airport chaos, 55% of those surveyed believe that it is temporary and will be over by September, while 45% believe it will be a longer-term issue.

Many Canadians did, however, say that they are worried that the current airport situation is the “tip of the iceberg” of what’s to come in the post-pandemic world.

Sixty-six percent of respondents said they believe airport delays are “just the start” of more problems with basic public services that are to come.

Meanwhile, 67% said they believe governments have been focused on the wrong priorities and have neglected basic services such as ensuring that airports are functioning.

This is not the first poll to have found that the majority of Canadians are concerned about the current situation in airports. A Leger poll conducted earlier this month saw 53% of Canadians worried about airport delays, including cancelled flights and long lines.

Despite airport delays that are concerning Canadians, the Trudeau government announced Thursday that it would resume random mandatory Covid testing for fully vaccinated air travellers.

The feds are also keeping their Covid mandates and restrictions at the border until at least September 30, leading to some critics accusing Trudeau of prolonging pandemic measures for political purposes.