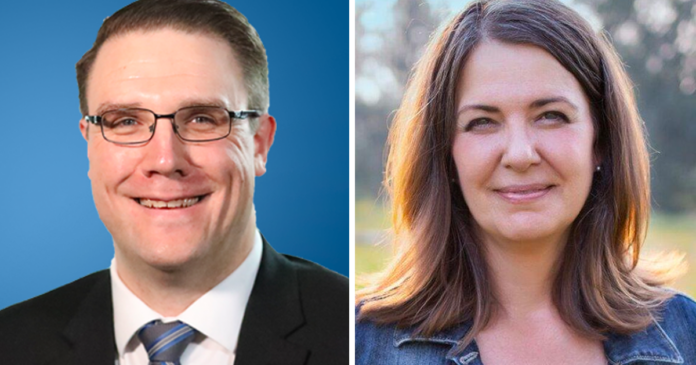 Smith said the Act, which would see Alberta refuse to enforce federal legislation deemed harmful to the province, would be her first proposed bill if elected Premier.

But the proposal won’t be adopted — and the number one way to upset Albertans is to overpromise and underdeliver, Nixon said.

“Going around and telling Albertans that you can accomplish something that you can’t accomplish is very problematic long-term for our party,” Nixon told reporters on Wednesday. “I’d rather see (candidates) under-promise and over-deliver.”

The Sovereignty Act is unlikely to pass the legislature because MLAs wouldn’t support a bill which calls for the “breaking of the law,” Nixon said.

“The way that I’ve seen it proposed one would not have any impact and would certainly be problematic from a legislative perspective.”

The Act is the product of the Free Alberta Strategy Group, of which co-founder Rob Anderson recently took a leave to serve as Smith’s campaign chair.

Critics of the proposal, including many in the legacy media, have accused the leadership frontrunner of flirting with a constitutional crisis since she first voiced her support for the Act.

At a campaign event on Tuesday evening, Smith said Ottawa already created a constitutional crisis when it blocked Alberta’s constitutionally-protected right to develop its own resources.

“We have a constitutional reckoning coming,” she said.

In an emailed statement to True North, Smith rejected Nixon’s claims and saidthe Alberta Sovereignty Act would empower the Legislature to refuse enforcement of any specific Federal Government law or policy that violates Alberta’s provincial rights under s.92 of the Constitution or the Charter of Rights and Freedoms of Albertans, once passed.

“The Act will only be invoked after a free vote of all MLAs in the Legislature has been held on whether and how the Alberta Sovereignty Act shall be used to oppose the specific Federal law in question,” Smith wrote.

Smith said an example could be if the feds mandated that all children under 12 receive a Covid vaccine to attend school or participate in sports. The Alberta Legislature would have a free vote on whether it will allow its health and educational agencies to enforce the mandate in Alberta.

“My guess is such a vote would pass with a healthy margin,” Smith wrote.

Nixon also said Alberta must “walk and chew gum” when working with Ottawa on federal-provincial relations. As an elected official “your words have impact” and the wrong words can block investment and cost Albertans their livelihoods, he continued.

“I haven’t spoken to Mrs. Smith,” Nixon said. “But you have to bring legislation to the legislature that is legal.”

Nixon was shuffled into the Finance portfolio from Environment shortly after Travis Toews resigned from the position to run in the leadership contest, as is custom.

Nixon recently introduced Toews at a campaign event. He said Toews is the best candidate to lead the UCP, but said this was not an official endorsement.